Thank you for joining this forex academy educational video for novices. In this session, we will be looking at fundamental analysis for novices, and we will be discussing h I c p. 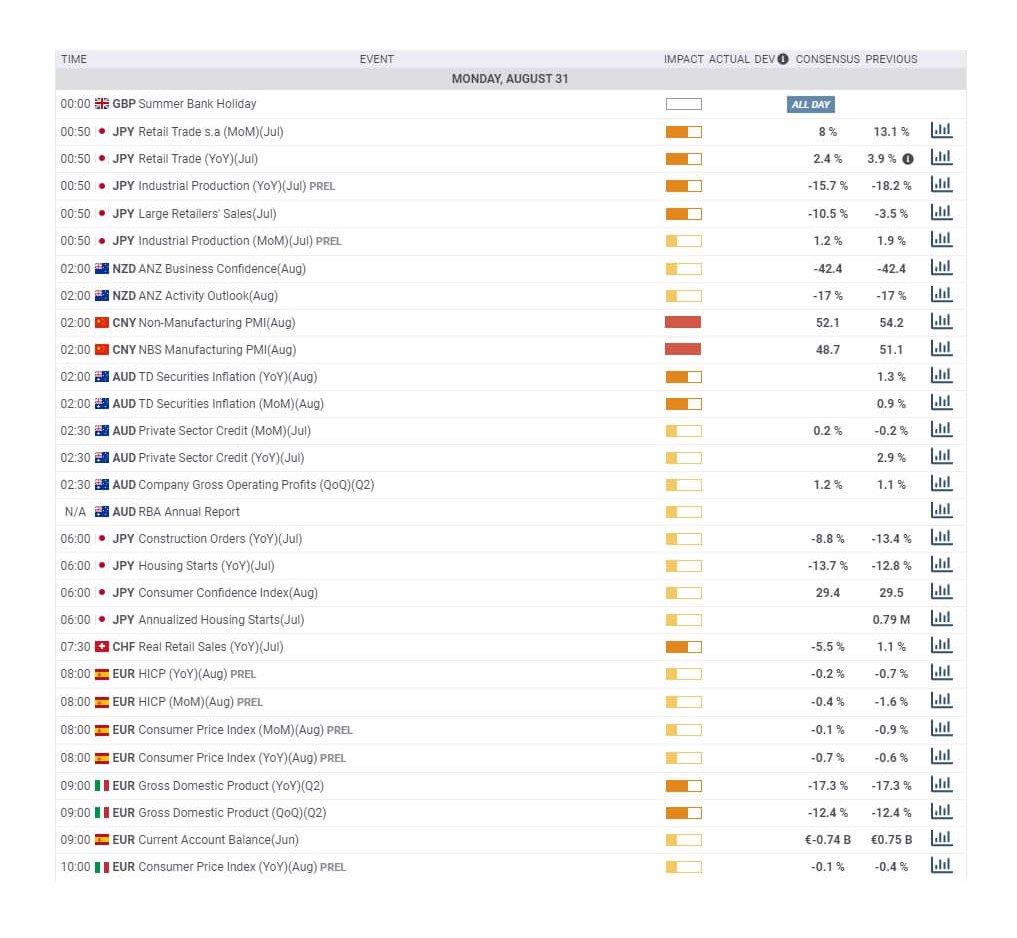 If you are new to trading, you will need to have access to an economic calendar, such as the one shown here, where governments around the world release economic statistics, usually weekly, monthly, quarterly, or annually, and whereby the financial markets look at these statistics in order to try and gauge the strength or weakness of an economy based on the release of this information. Such data releases can cause the relating currency of that country to stay the same or gain in strength, or lose value against other currencies. Therefore, it is vitally important that you understand how economic calendars can help your trading. 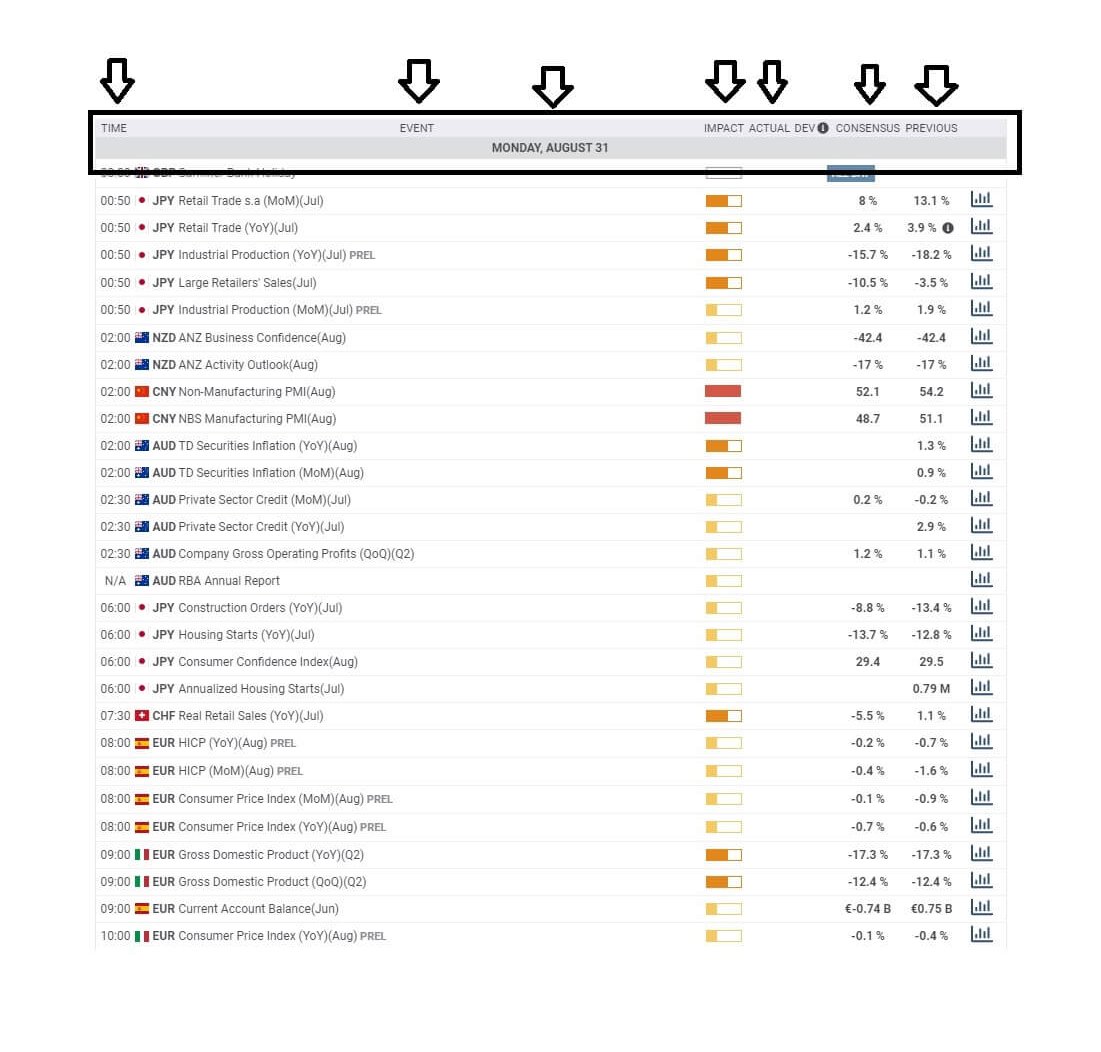 The most important aspects of an economic calendar are the time of the release, the type of event, the day and the date, the impact level likely to be received by the market, which is usually low, medium, or high, the actual data, which is usually subject to an embargo and will be populated on the calendar usually just a few moments after its release. The consensus, or what the market thinks that information is going to be based on forecasts formed by economic and financial analysts, and the previous data, whether that be weekly or monthly, etc. 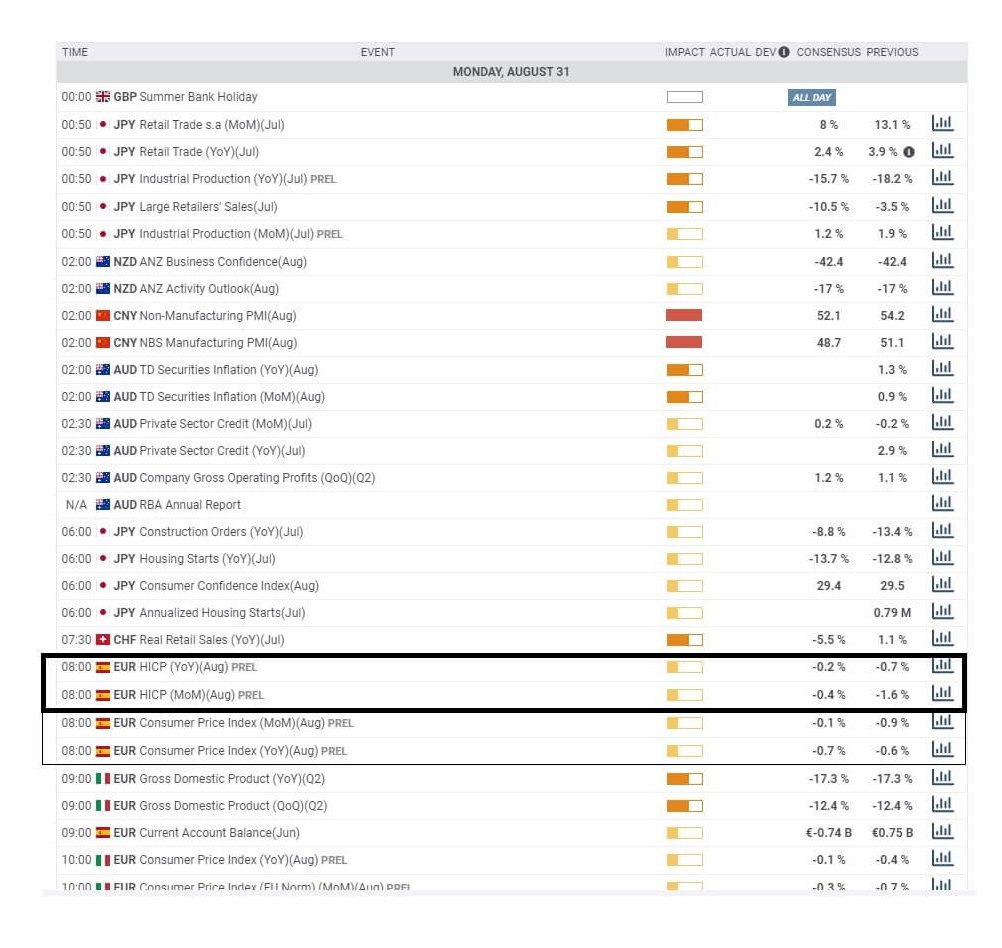 Here we can see on the economic calendar for Monday the 31st of August 2020 at 8 a.m. BST that Spain will be releasing their harmonized index of consumer prices or h I c p data and simultaneously releasing consumer price index information for both month on month and year on year, and these are all preliminary readings.
Spain has the 13th largest economy by gross domestic product in the world, and because it is part of Europe, it is measured as the 6 largest EU member in Europe. The harmonized data is a component of the overall data for the eurozone. Therefore, because Spain is a relatively smaller component of the overall picture for the eurozone index of consumer prices, it has a low impact upon its release. The statistics are weighted and are used as a way of measuring inflation and price stability across the eurozone. Inflation is tightly monitored by the European Central Bank, which will have a benchmark target of around 2%, which is fairly typical for Western economies, although the United States has raised that bar slightly due to the ongoing pandemic and the devastating effect it is having in America at the moment.

Typically, a high reading is positive for the euro, and a low reading is negative. However, all economic data is taken very seriously due to the fallout from the pandemic, but economists and therefore the consensus reading is usually fairly accurate with the smaller member states, which typically means there are fewer shocks and again because Spain is a smaller member of Europe, it is unlikely to cause market volatility upon its release. Nonetheless, one should always be guarded, just in case.