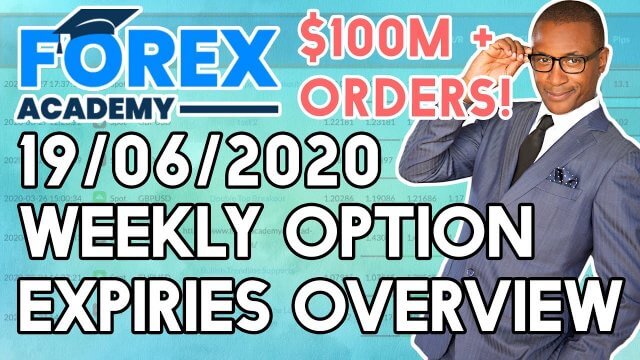 Hello everybody and thank you for joining us for the daily FX Options Market Combined
Volume Expiries review for the trading week ending on Friday, 19th June 2020. Each week we will bring you a video taking a look back at the previous week’s FX option expiries and how they may have attributed to price action leading up to the maturities which happen at 10 a.m. Eastern Time, USA. 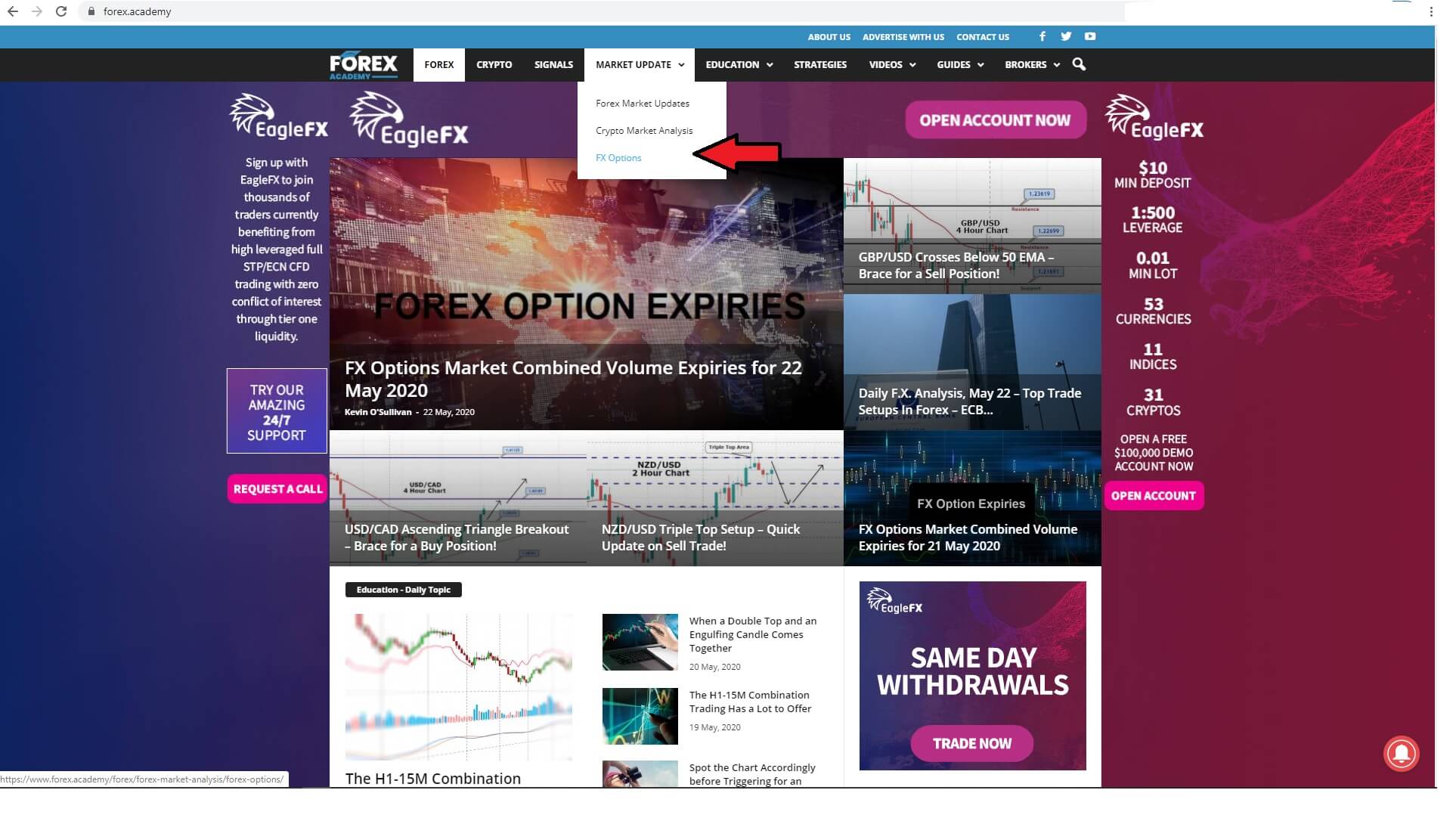 Each morning, from the FA website, our analyst, Kevin O’Sullivan, will bring you details of the notable FX Options Market Combined Volume Expiries, where they have an accumulative value of a minimum of $100M + and where quite often these institutional size expiries can act as a magnet for price action in the Spot FX arena leading up to the New York 10 a.m. cut, as the big institutional players hedge their positions accordingly.

Kevin also plots the expiration levels on to the relevant charts at the various expiry exchange rates and colour codes them in red, which would have a high degree of being reached, or orange which is still possible and where these are said to be in-play. He also labels other maturities in blue and where he deems it unlikely price action will be reached by 10 a.m. New York, and thus they should be considered ‘out of play.’ Kevin also adds some technical analysis to try and establish the likelihood of the option maturities being reached that day. These are known as strikes.
Please bear in mind that Kevin will not have factored in upcoming economic data releases, or policymaker speeches and that technical analysis may change in the hours leading up to the cut.
So let’s look at a few of last week’s option maturities to see if they affected price action. Firstly, there were no notable options for Monday 15th June. 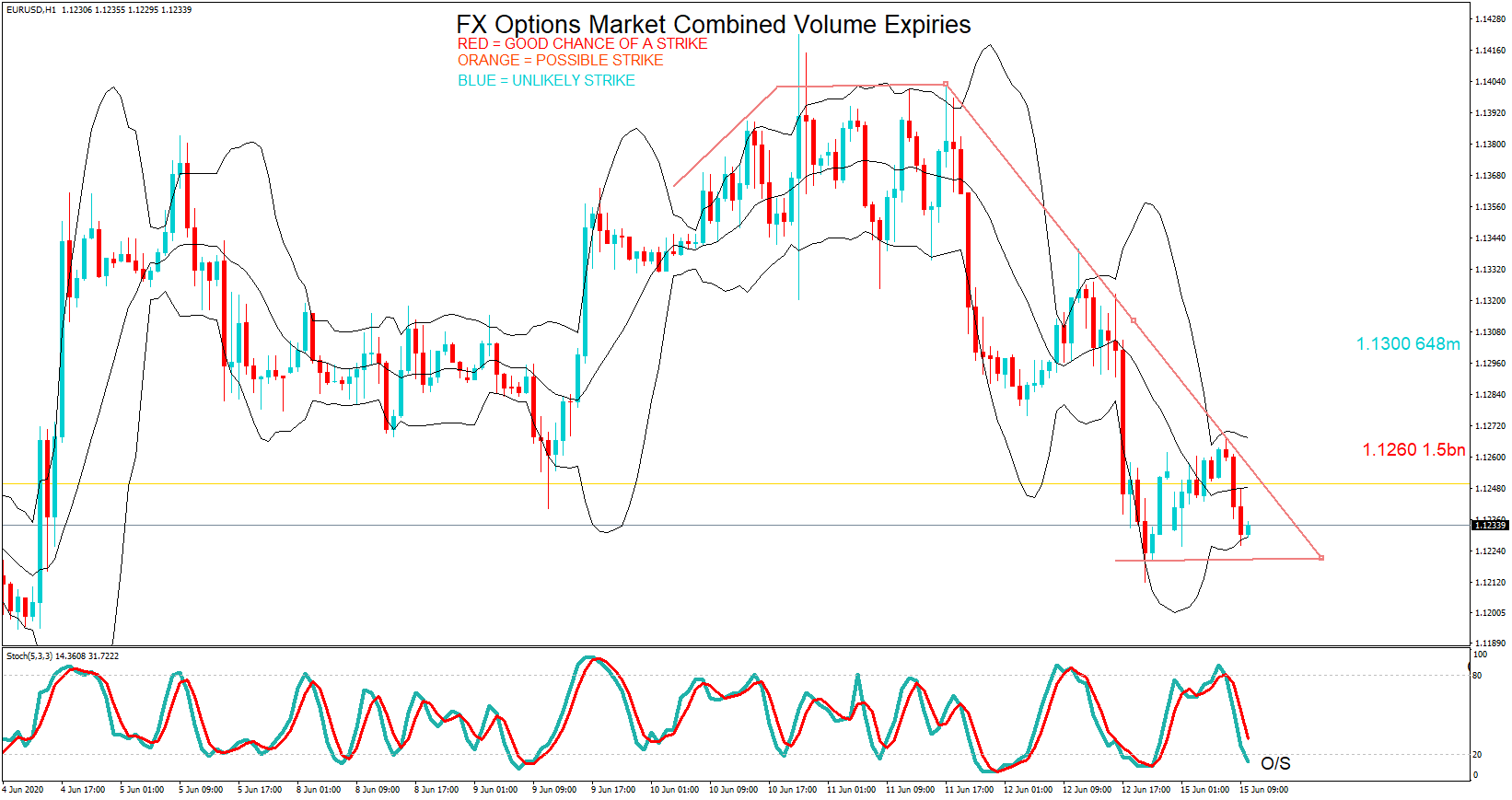 There were two expiries for the Euro US Dollar pair at 1.1260 and 1.1300.
Kevin said that the pair was oversold during the early morning session. And that the likeliest candidate would be a strike for the 1.1260 one. 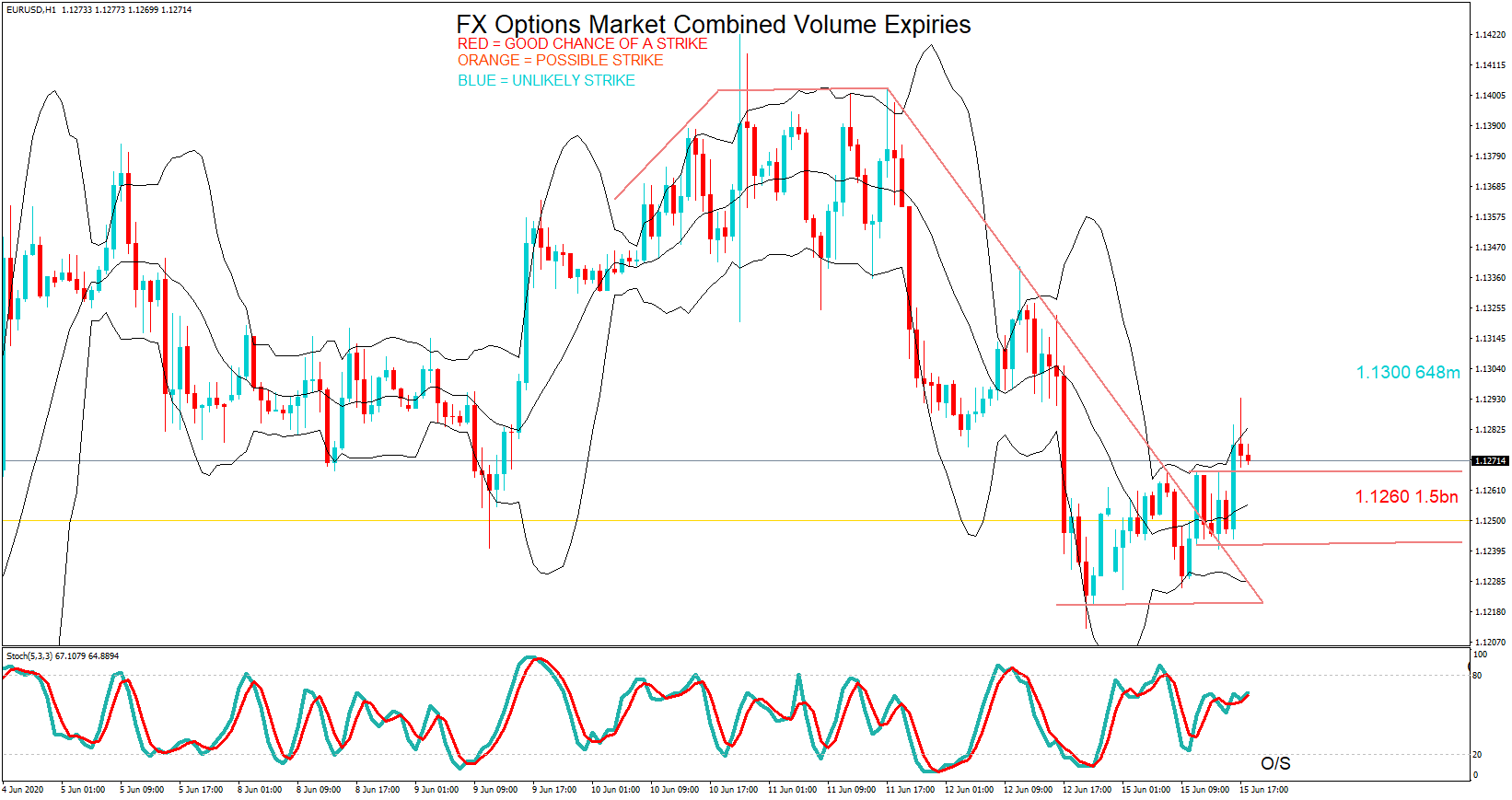 Here we can see that price action gravitated around the 1.1260 level during the late morning and early US session.

The second set of option expiries were with the USD Japanese Yen pair. And here is the early market analysis. Kevin suggested the price action would remain at the current levels as the two expiries were close to the spot price, and they were large in value. 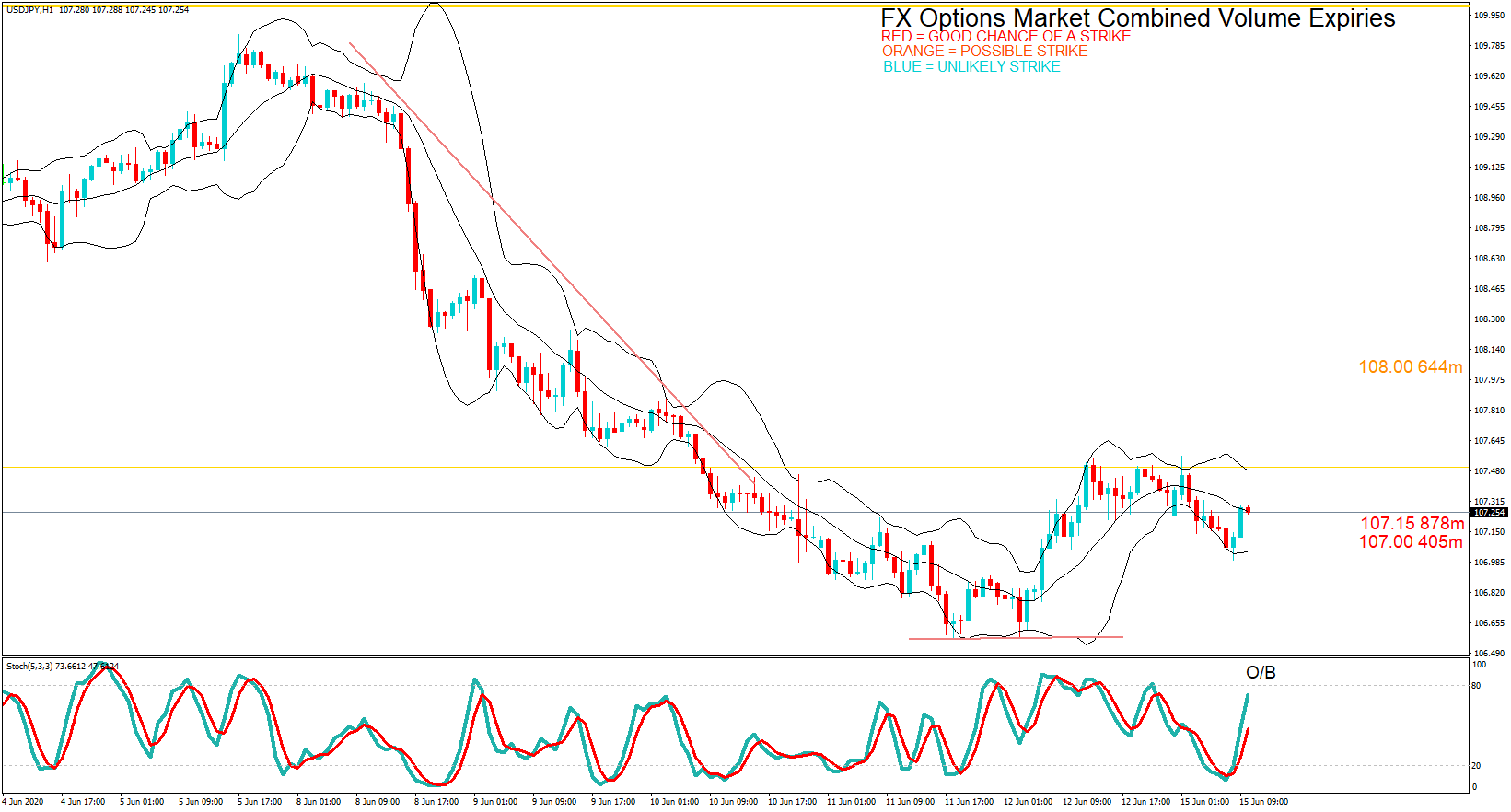 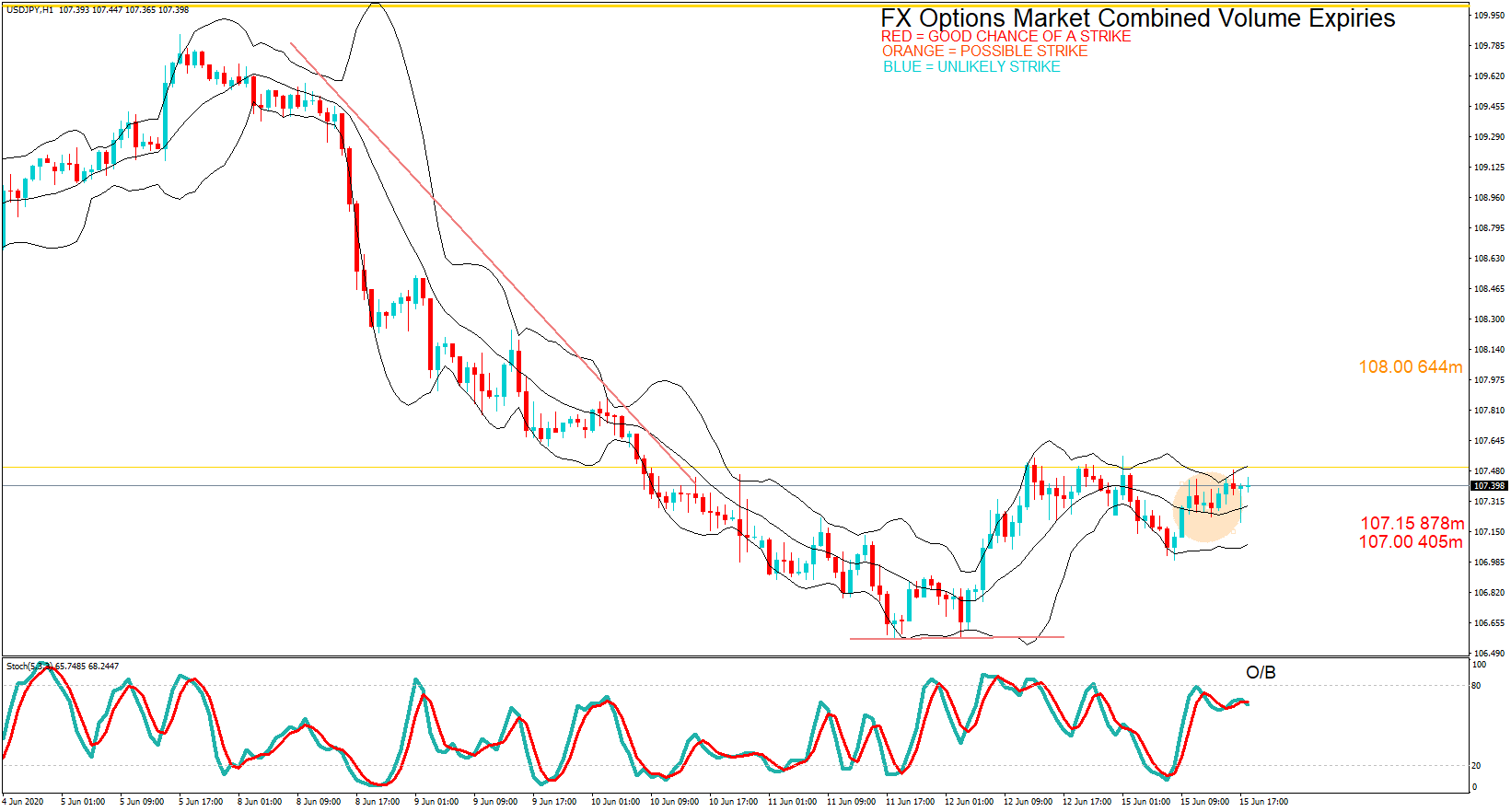 And here we can see price action did as expected. 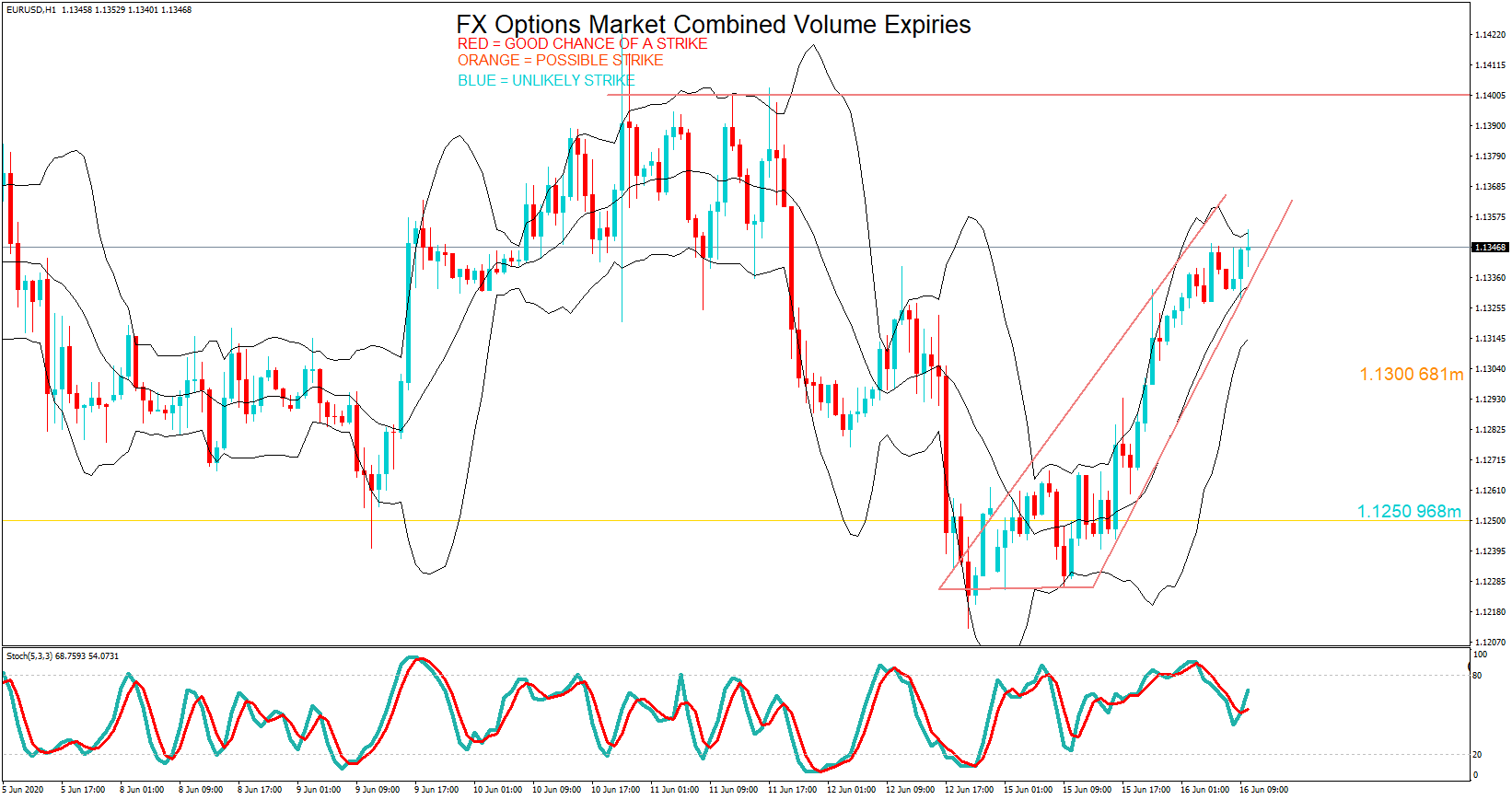 Tuesday the 16th saw two maturities at 1.1300 and 1.1250 and where the emphasis was placed on the bull trend with the caveat that there was ZEW data coming from Germany and Retail sales from the USA, which came in much stronger than expected and gave the Dollar a lift. As such, the pair’s bull run faded. 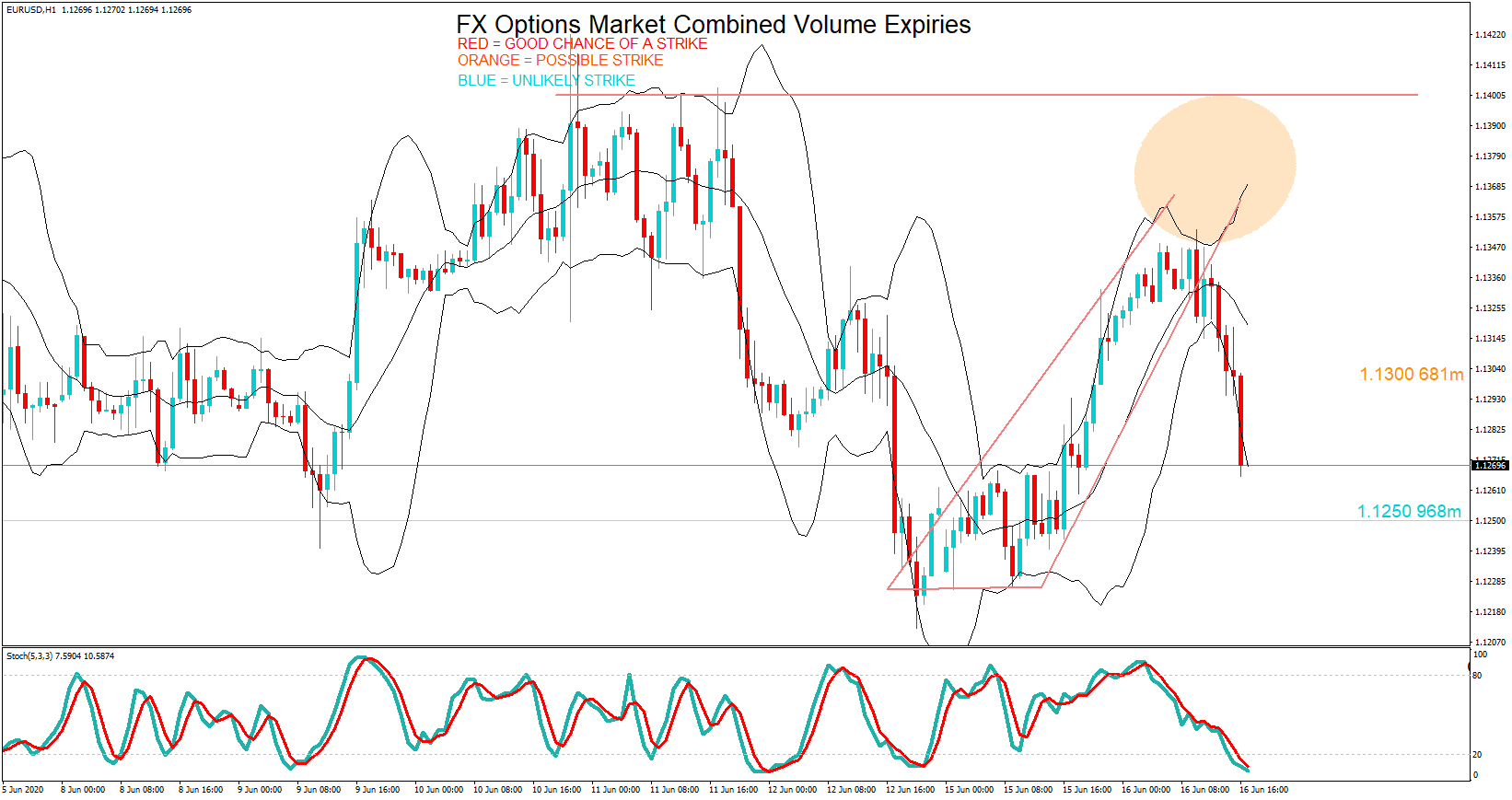 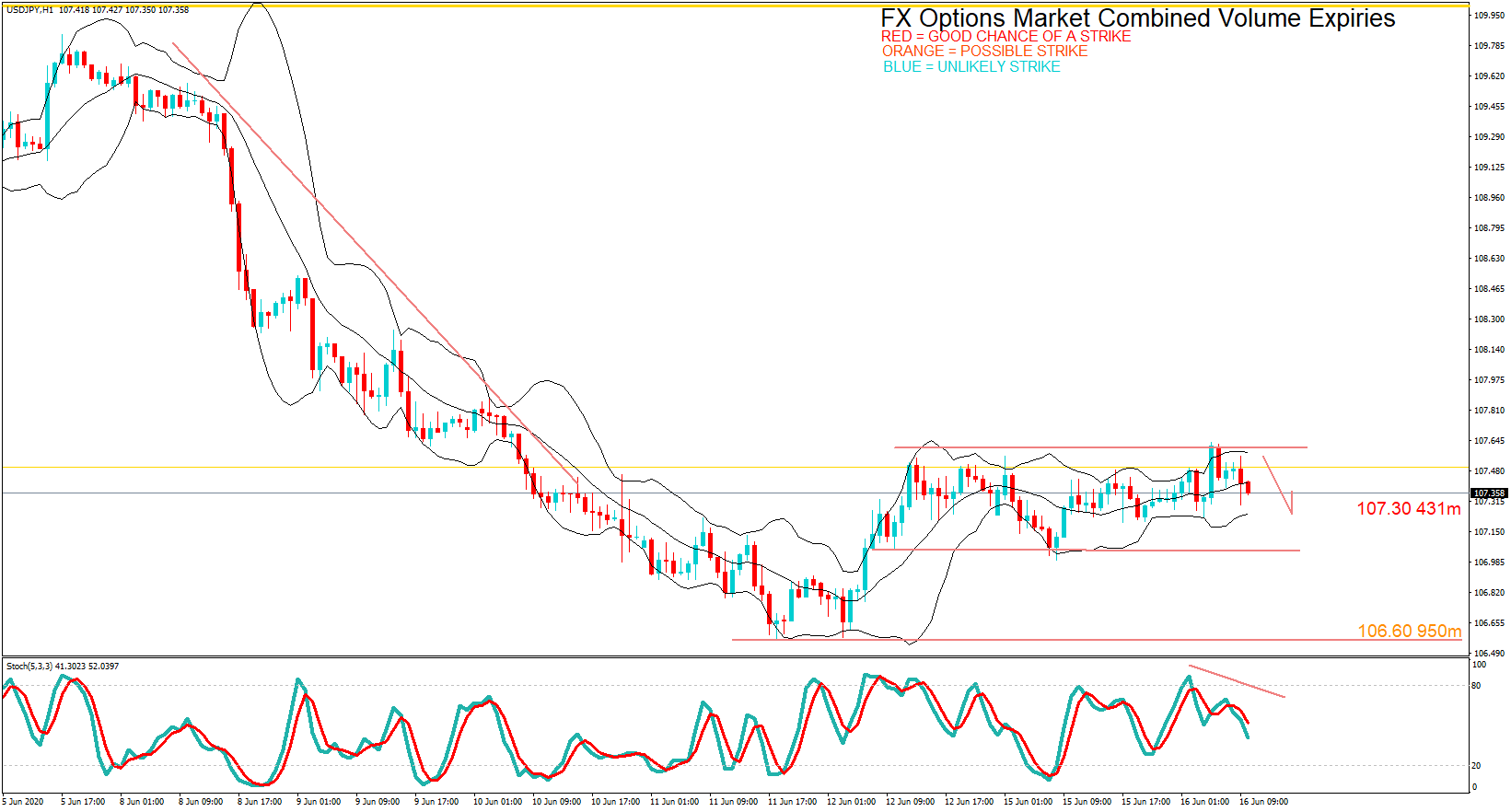 There was also a maturity at 107.30 for the USD Japanese yen pair, and the analysis was that the pair was in a tight consolidation phase. 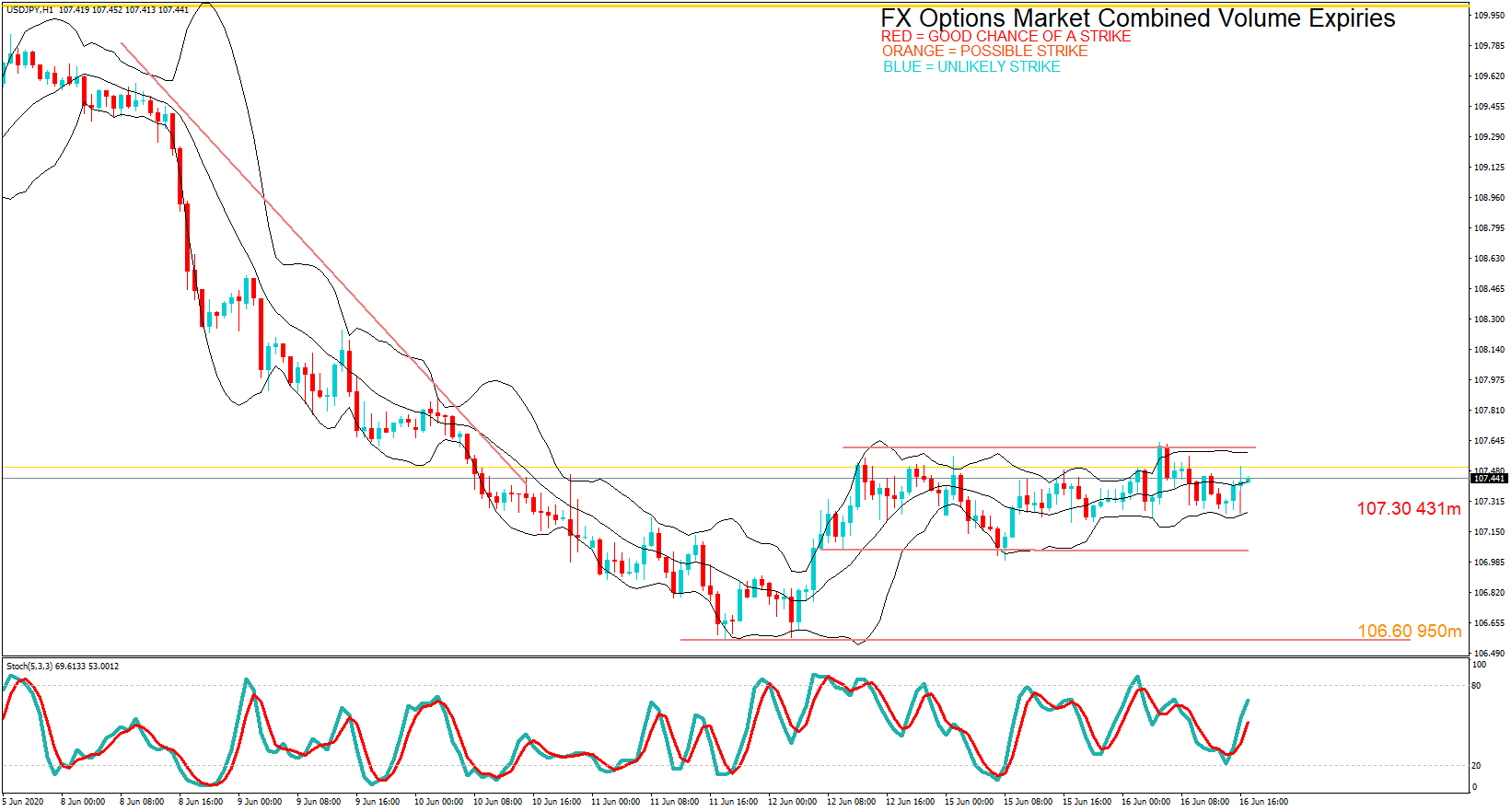 At the time of the cut, the pair hit 10742, just 12 pips away from the maturity and in line with the analysis as provided by Kevin 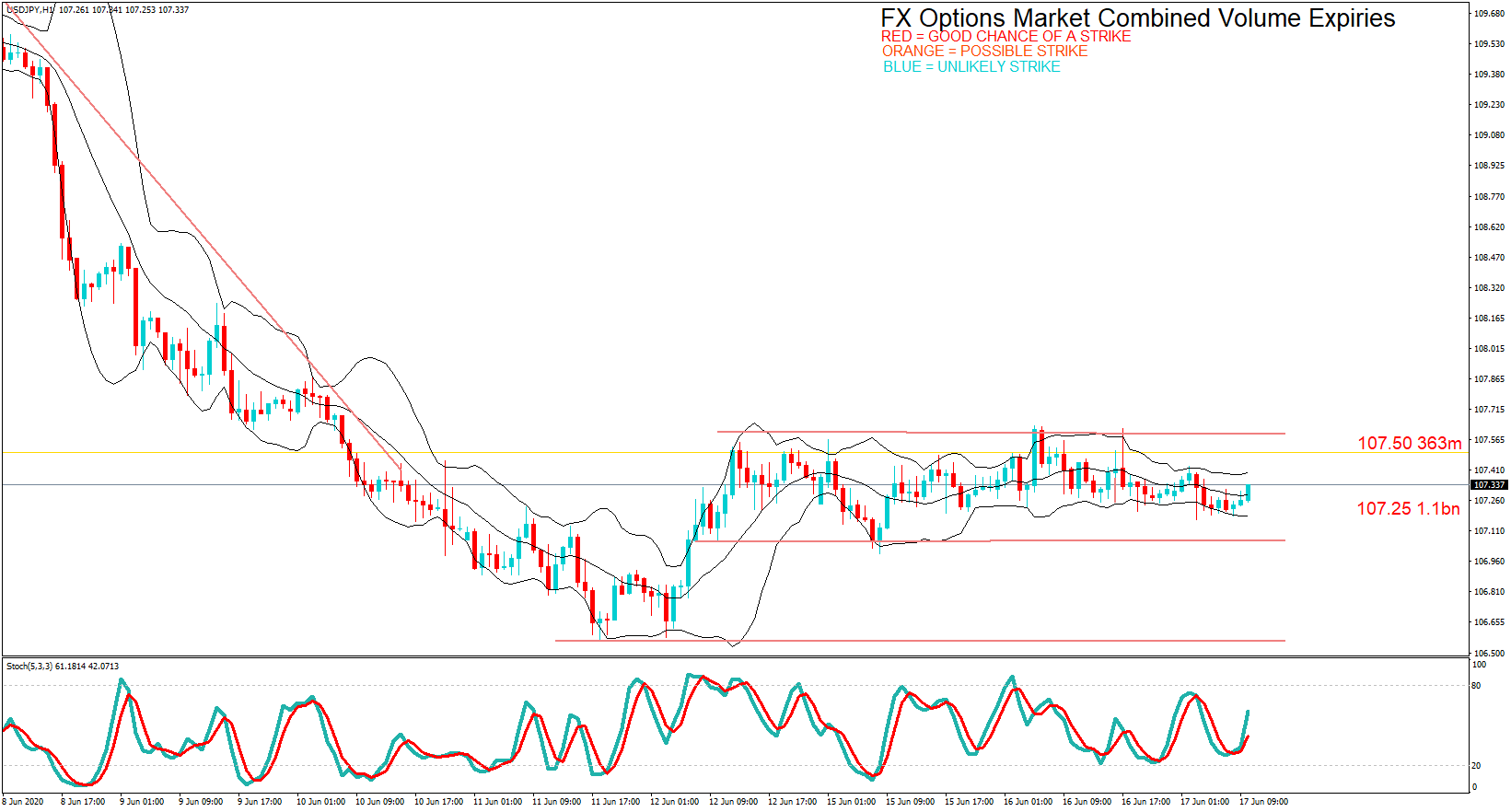 On Wednesday, there were two option expiries for the USD Japanese yen pair as e can see here, and Kevin suggested that price action was in a continual sideways consolidation period and likely to remain there.

At the time of the cut, the exchange rate was 107.26. Just a single pip away from the maturity at 107.25. remember some brokers will have been quoting 107.25 in which case this is likely to have been a strike. 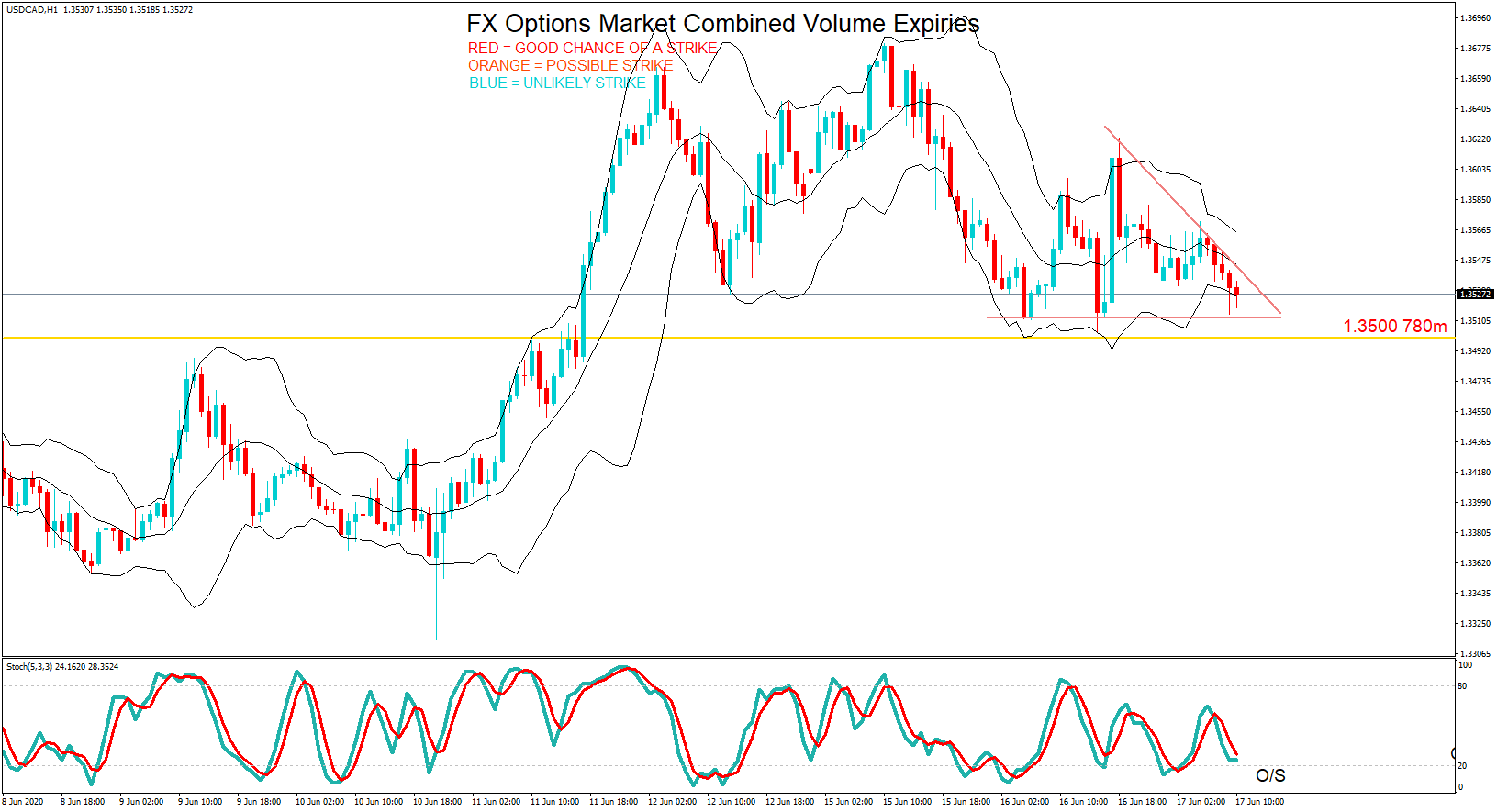 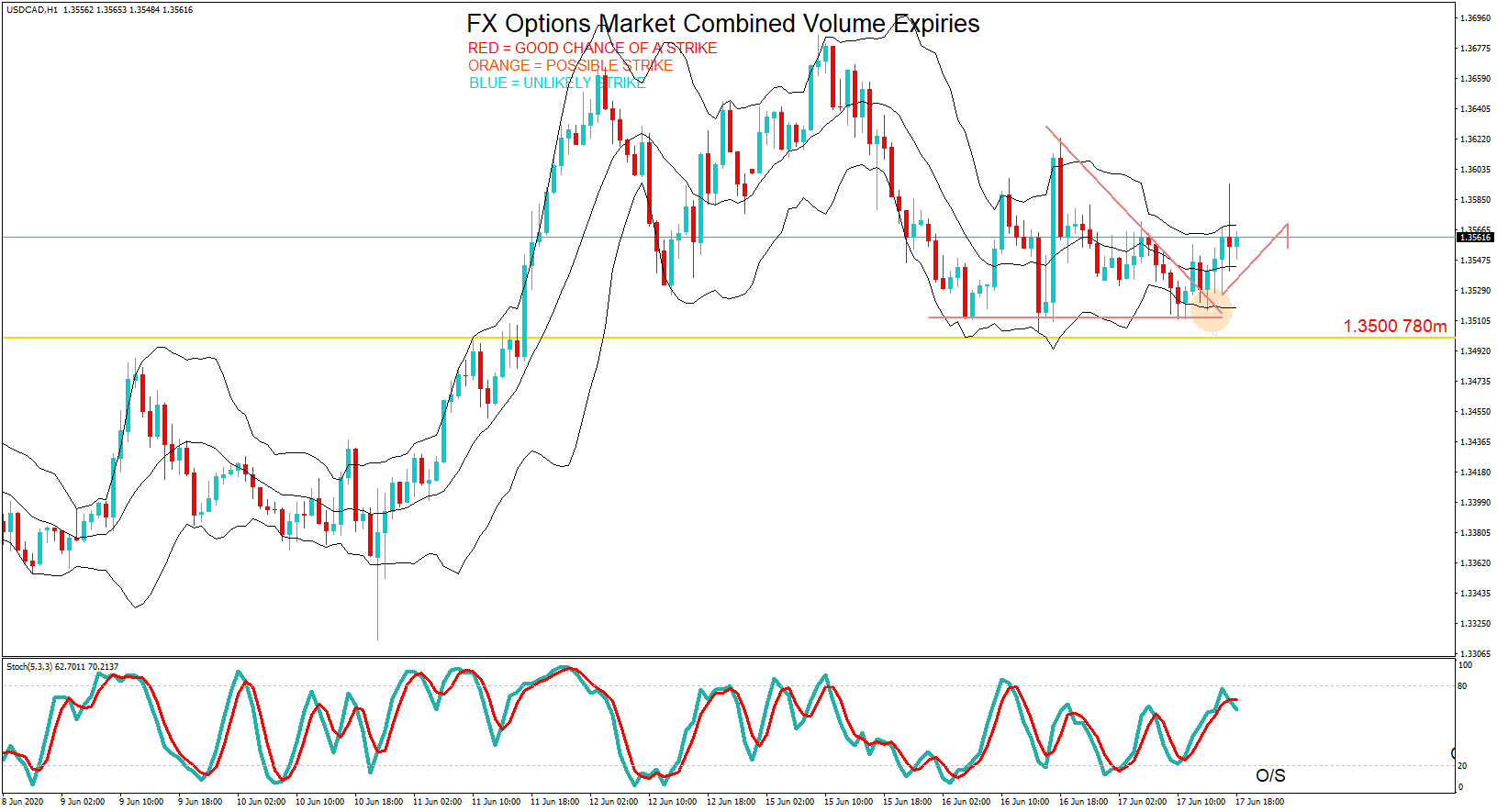 Price action maintained the downward pressure but eventually broke out of the wedge to the
upside and hit 1.3563 at the cut. 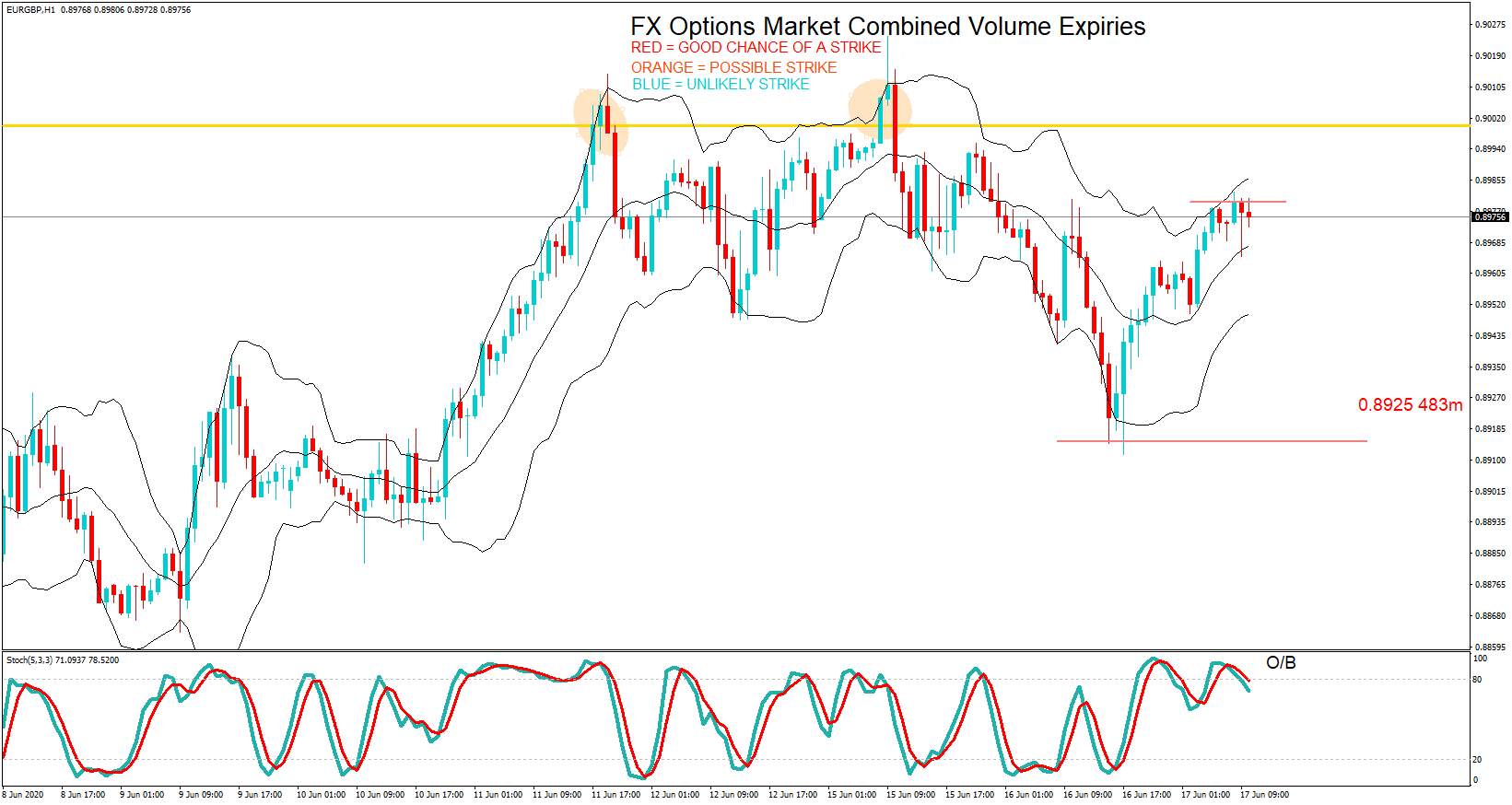 Also, on Wednesday, there was a maturity for the EUR GBP pair. Kevin’s analysis suggested

that the pair was overbought and likely to pull back to the 0.8925 option maturity. 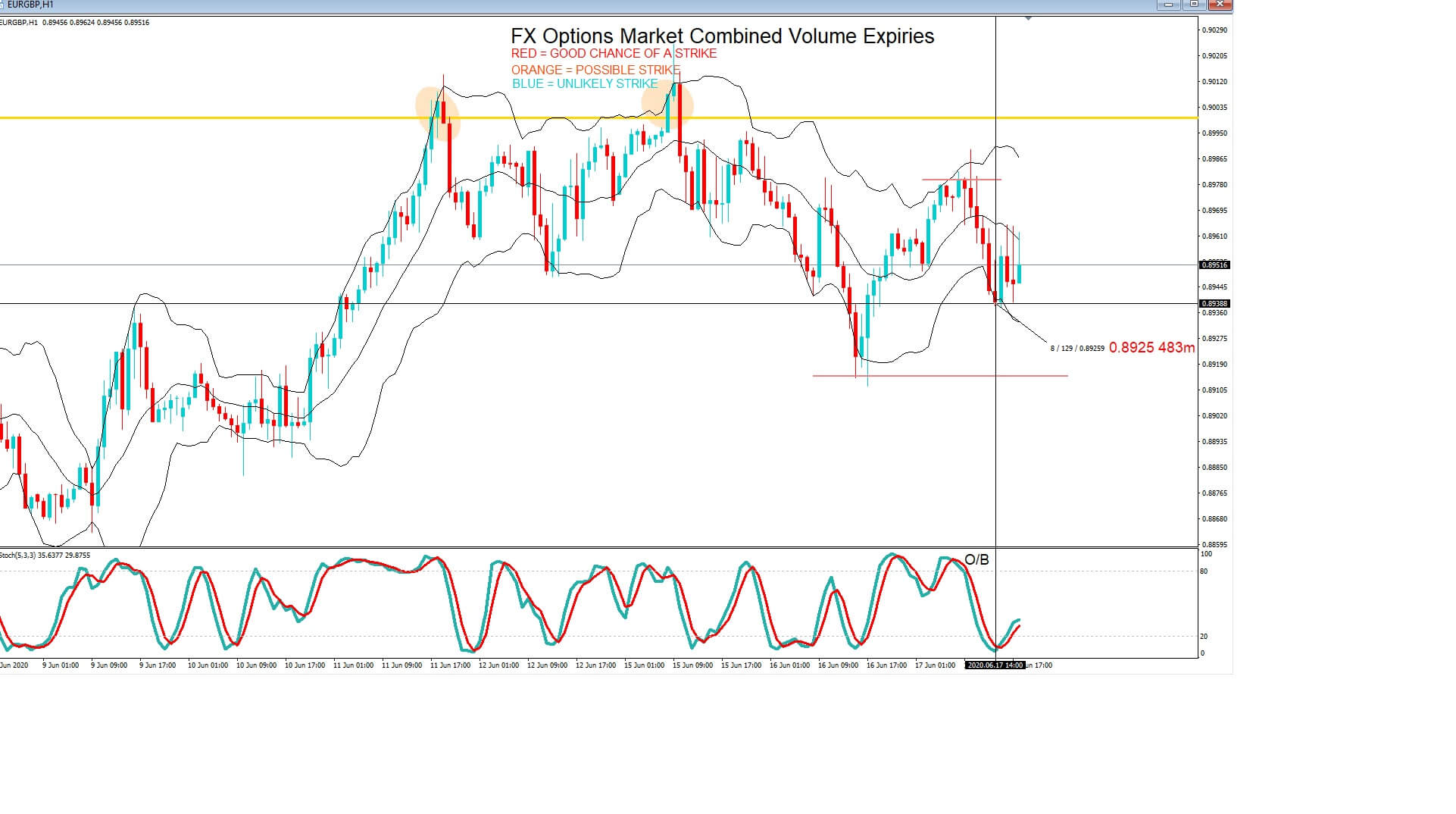 Here we can see that price action did indeed pull lower. A nice trade had you gotten in and sold the pair in the morning. Price fell to within 13 pips of the maturity and remained in a downward trend well into the European and US session. 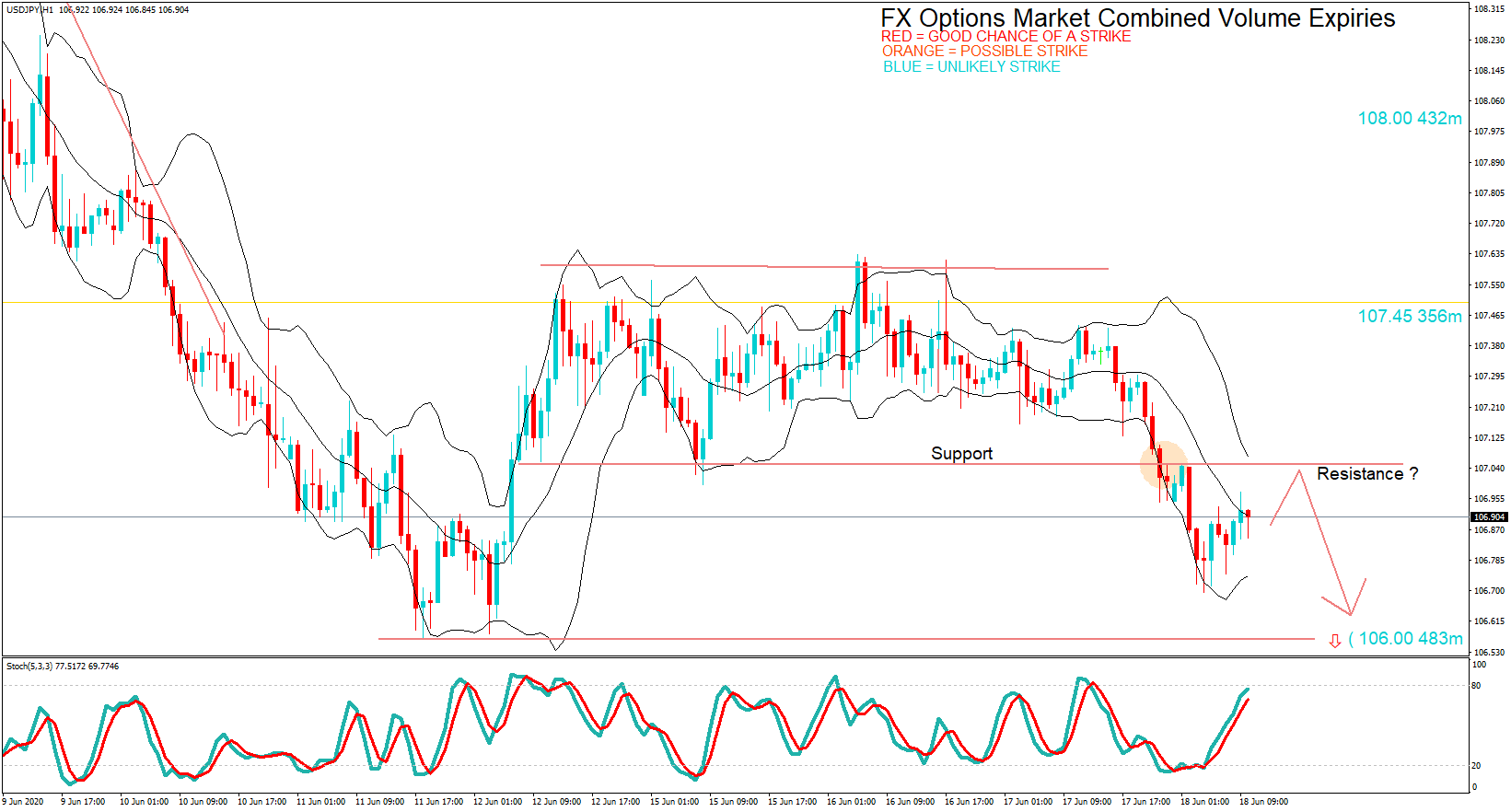 Turning our attention to Thursday, we have three option expiries for the USD Japanese Yen pair. And this is Kevin’s analysis at around 8 a.m. BST, where he calls all three as out of play and suggests price action will conform to the support becoming resistance theory. 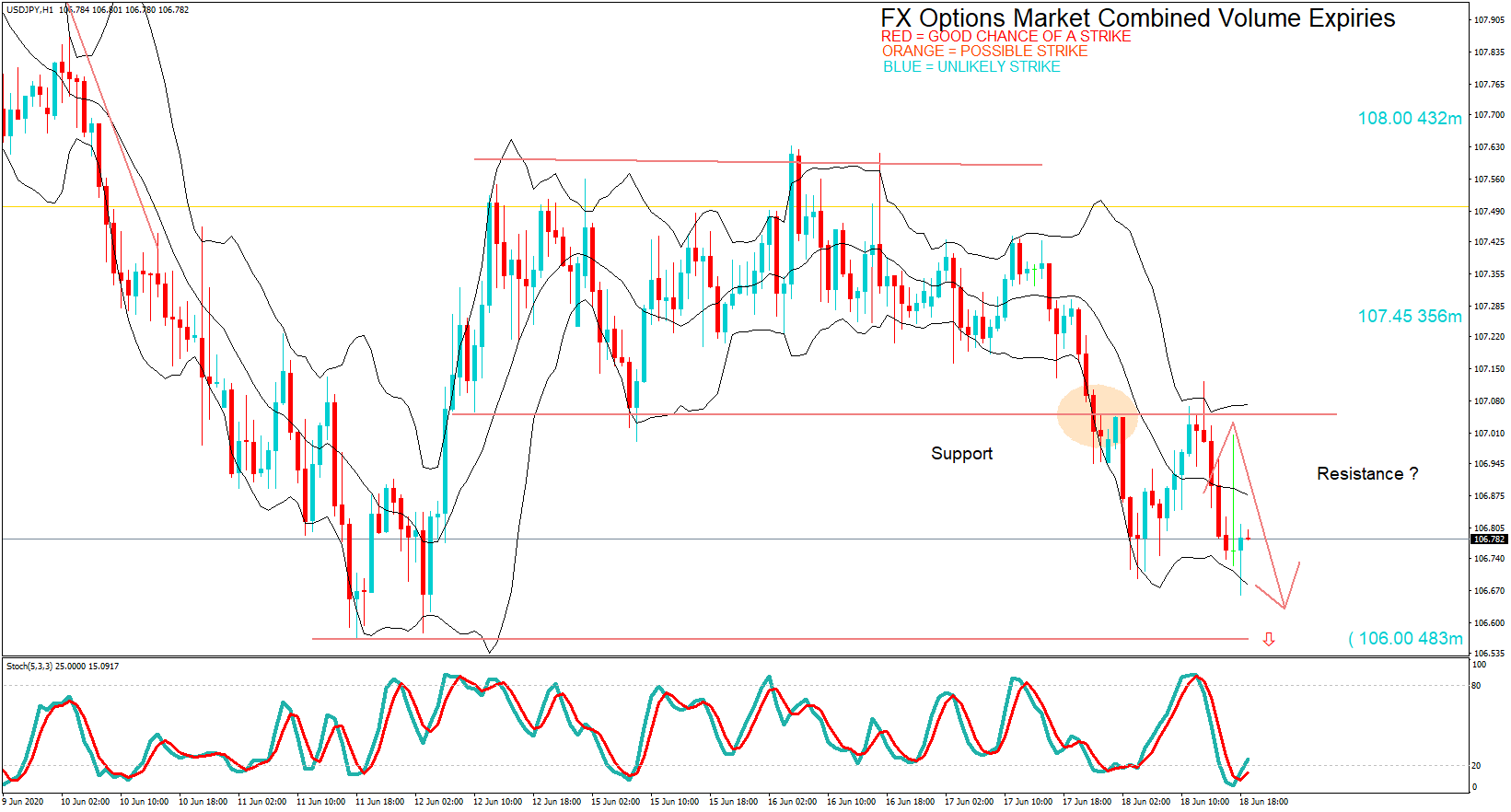 Let’s fast forward, and we can see price action did exactly what was expected, it followed the support becoming resistance pattern, and all three options remained out of play.

Still, with Thursday, there were three options with EURO USD, and Kevin’s early analysis was that price would likely come for a retest of the 1.1200 level if the 1.1250 could be breached. If not, the two red options would remain in play. 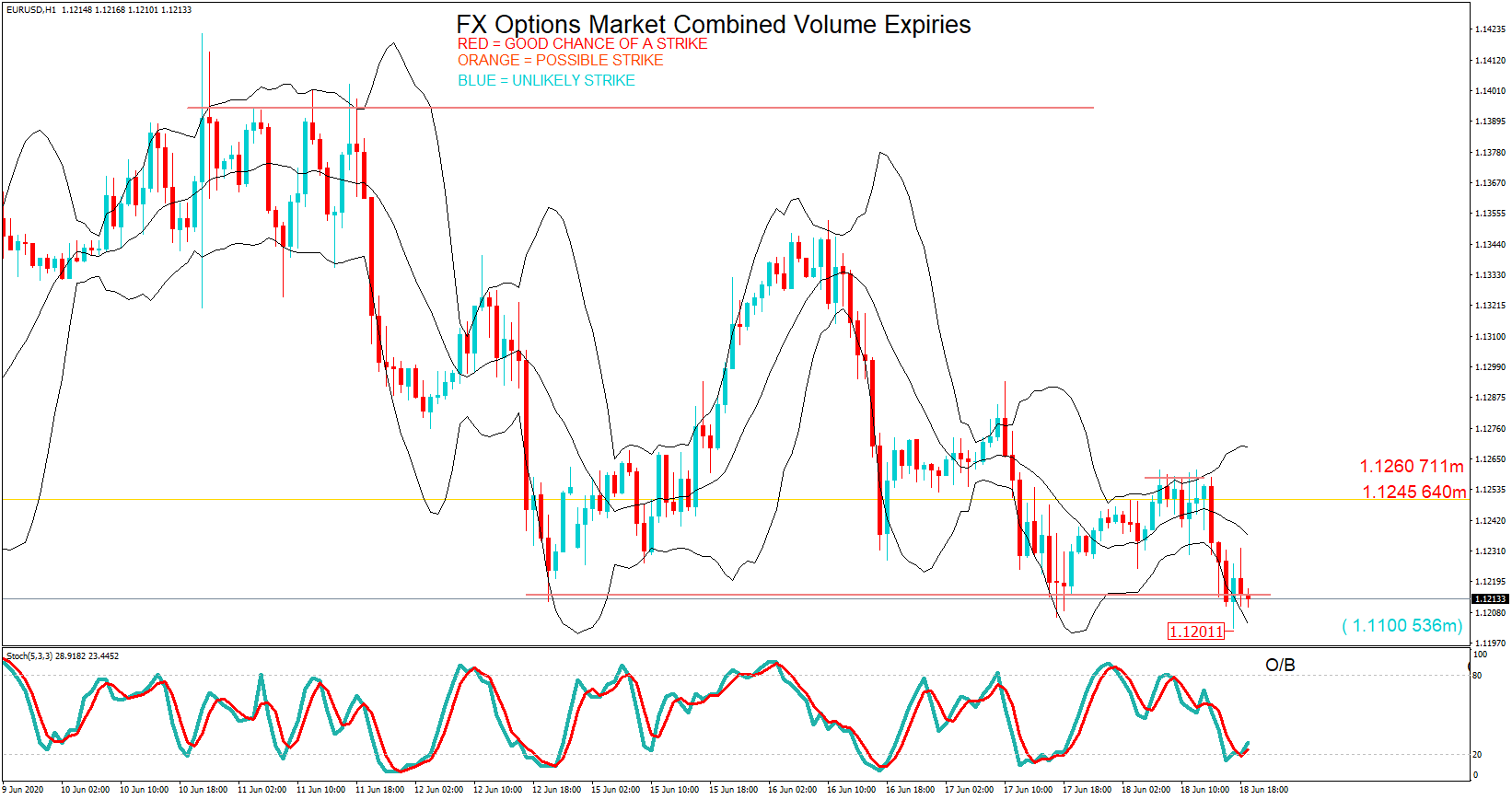 Please remember, Kevin’s technical analysis is based on exchange rates, which may be several hours earlier in the day and may not reflect price action at the time of the maturities.
We suggest you get into the habit of visiting the FA website each morning just after 8 a.m. BST and take the levels and plot them onto your own trading charts and incorporate the information into your own trading methodology in order to use the information to your advantage.
Remember, the higher the amount, the larger the gravitational pull towards the exchange rate maturity at 10:00 a.m. Eastern time.
For a detailed explanation of FX options and how they affect price action in the spot forex market, please follow the link to our educational video.