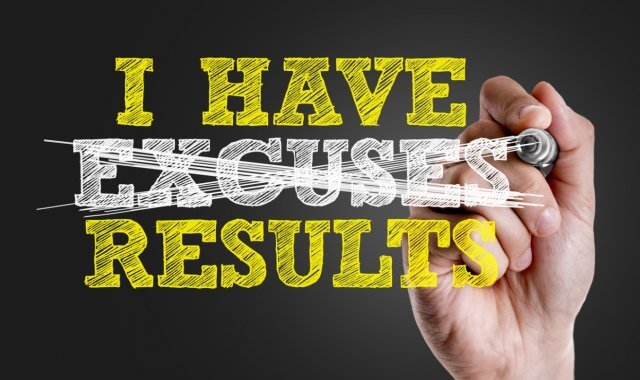 If you look around the internet, you will find a lot of excuses out there about why someone may not be trading well or why they have been losing money. The problem with these excuses is that they often show that the user has a lack of understanding about how the markets work, either that or they are in denial and do not want to admit that it may have actually been something that they did that caused the trade to lose.

My broker is a scammer!

This excuse could actually have a little merit to it, depending on the broker that is. There are some very shady and dodgy brokers out there, ones that have taken part in some pretty low business operations which have left people without any of their money, or tactics which encourage people to deposit money that they cannot afford to deposit, if this was the case then the excuse would be pretty valid. The problem comes when we look at the more reputable brokers, the ones with great track records that have done pretty much nothing wrong in their entire existence. People still claim that these brokers have scammed them and stolen their money, simply due to the trader losing their money.

This can also be seen with people who claim that all regulated brokers are good and unregulated ones are bad. The regulation covers the protection of their money, it does not always dictate the behavior of the broker, so people claiming that all unregulated brokers will scam you is not the case at all. The majority of traders who use the reputable ones have simply treated badly or gambled, the brokers often do nothing wrong (unless they are an actual bad broker). So be wary when you see people claiming to have been scammed by the broker, it is not always the case.

The markets are against me.

This is something that we see a lot, people take their time to analyse what they think is a good trade, they have put the time and effort in, they then place the trade and it goes the wrong way, or it starts to go well, then suddenly turns and zooms off in another direction. What happened? The markets must be against me, they obviously saw me put on this trade and then decided to go against me so I would lose my money. Reality check, the markets do not even care who you are, they do not notice the little money that you are putting into the markets. There are trillions traded each day on the markets, you $100 trade is nothing to it, not worth anyone’s time or effort to try and trade against it.

Newer traders often don’t realise how many things there are that can affect the markets. You can never prepare for them all, in fact, you cant prepare for even half of them, news events, natural disasters, banks changing consensus, loads of things affect them, just because it went against you, doesn’t mean it was anything personal.

Trading does not take a long time, what takes a long time is the preparation of trading. This is unfortunately the part that you need to do at the start of your career and so it is the part that newer traders see the most. The thing that many do not understand is that once you have gotten through the initial planning and preparation stages, the actual process of putting on the trades does not take time at all. It is common to see it plastered all over the internet and forums that you will not have a life when you start trading or you won’t have time to do it after work, but you can, and many people do. Many people trade part-time after or before work, it is more than possible, people just do not want to put the effort in, or simply look at the start of the process and then assume that the entire trading career will be the same.

Trading is too complicated.

Trading looks complicated, in fact, it is complicated. We will probably give them this one. It takes a lot of effort and time to learn how to trade properly, not something that a lot of people want to actually do. The problem is that from the outside it looks incredibly simple, here isn’t actually that much to it, you guess that something will go up or down and put that trade on. Unfortunately, it is not that simple and once people have started trading they have realised this, do not want to put in all the time and effort to actually learn how to trade properly and simply chalk it up as too complicated and give up.

You can’t make enough to live on.

This is normally something that people say if they have gone into trading with their expectations of what they will be able to do is set way too high. The unfortunate truth is that a lot of people are now getting the idea that trading can make you rich overnight, this view is often formed when people view some of the frequent adverts that are promising less than realistic returns. When you go into it thinking you will have the world, you will be disappointed.

People also go in with the expectation that they will be able to make enough to quit their job within a couple of months, again, this is not something that is realistic. Yes, you may be able to make enough to quit your job, but that will take a long time to happen. It takes a lot of time to learn, not something that some people want to put in, so as soon as they do not make as much as they want, they blame forex and simply state that you cannot make as much as people say that you can.

So those are some of the things that you often see posted around social media or on trading communities. They are often from people who have entered trading without a proper understanding of what is involved or even what trading actually is. If you have that knowledge then you most likely won’t be making the excuses that we went through above.