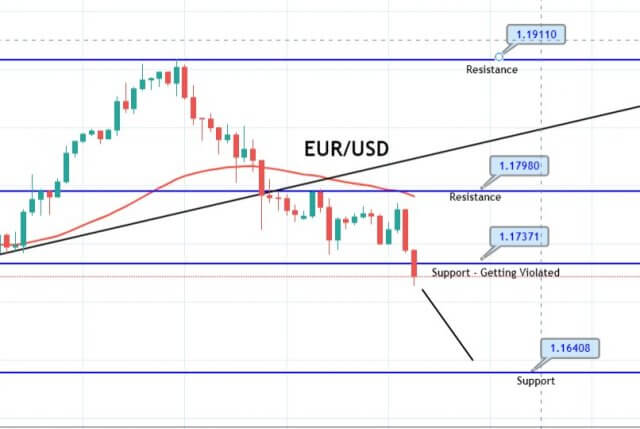 It is worth recalling that the annual Eurozone inflation figures came in at +0.4% in July, met the +0.2% expectations, and crossed +0.3% previous as per the Eurostat’s flash reading of Eurozone CPI report. In the meantime, the core figure rose to +1.2% in the reported month against +0.8% expectations and +0.8% previously. However, this positive data was unable to provide any support to the shared currency.

The losses in the currency pair were further bolstered by the concerns that the European Union’s digital protectionism will likely exacerbate Washington and Beijing, which kept the shared currency under pressure and contributed to the currency pair losses. France officials recently have taken aggressive action against U.S. tech companies for years while threatening to impose billions of euros in fines on Intel, Microsoft, Facebook, Google, Qualcomm, and Amazon.

Apart from the EUR, the U.S. Congress failed to agree on the much-awaited extension of the unemployment claims benefits as they expired on Friday. Besides, the U.S. policymakers also could not agree over the much-awaited fiscal package to control the pandemic’s economic impacts, as Democrats and Republicans still have differences over the size of the package. This, in turn, made the S&P 500 Futures to mark 0.30% losses to 3,260. The same portrayed the market’s risk-off mood and gave extra strength to the safe-haven assets.

On the other hand, the risk-tone was further bolstered by the on-going tension between the United States and China. It is worth reporting that the U.S. President Donald Trump released notification to ban the Chinese video app TikTok in the United States. Whereas, the Secretary of State Michael Pompeo also followed President Donald Trump’s footsteps while saying that the U.S. will take action shortly on Chinese software companies that are providing data directly to the Chinese government, which caused the risk to U.S. national security. These newer to newer tensions between US-China could harm the trade deal.

At the coronavirus front, the increasing pandemic numbers from the U.S., Australia India, and Brazil continued to exert downside pressure on the risk sentiment. As per the latest report, Australia’s Victoria has recently been given the “state of disaster” title after cases rose past-670 during the weekend. On the other hand, Tokyo reported 292 new coronavirus infections on Sunday, after cases increased by more than 400 in the past two days.

The market players will keep their eyes on early-month activity numbers from China and the U.S. As well as, the final German and Eurozone manufacturing PMI numbers for July will be key to watch. Moreover, the USD price moves and coronavirus headlines will play a key role in determining the intraday momentum.