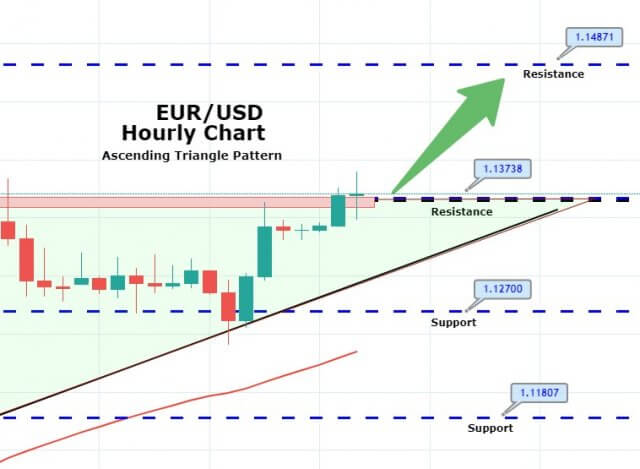 The EUR/USD is trading slightly bullish and took bids around above the 200-week simple moving average (SMA) of 1.1360 level mainly due to the broad-based U.S. dollar weakness ahead of U.S. Federal Reserve policy meeting.The EUR/USD is trading at 1.1355 and consolidates in the range between the 1.1332 – 1.1370. However, the Fed’s monetary policy statement is scheduled at 1800 GMT and will be followed by a press conference from Chairman Jerome Powell.

During the early hours, the Eurostat report showed that the eurozone economy weakened by 3.6% quarterly in the first quarter. But this slightly better than expected figures failed to impressed shared currency investors.

At the Fed front, the central bank will likely keep interest rates unchanged at a record low and expected to indicate a sharp contraction in the economic activity this year and near-zero interest rates for a few years. However, the reason for the sharp contraction in the economic activity could be attributed to the pandemic, which has put the U.S. and the global economy into recession while the market has already priced in all situations. Therefore, the dismal predictions might not be able to weaken the U.S. dollar.

At the USD front, the broad-based U.S. dollar remains pressured near the lowest since early-March as traders awaiting details from the U.S. Federal Reserve policy meeting, which is scheduled to happen later in the day. It should be noted that the Fed can announce measures to control the recent increase in bond yields, which will likely push the dollar down further. Whereas, the U.S. Dollar Index that tracks the greenback against a basket of other currencies moved slightly by 0.01% to 96.332 by 11:36 PM ET (4:36 AM GMT).


EUR/USD is consolidating in a narrow trading range of 1.1370 – 1.1276 level, and right now, it seems to break out of this trading range. On the lower side, the next target level seems to be 1.1185. Currently, the pair is facing immediate support around 1.1274 level, and closing of candles below this level may lead the EUR/USD prices further lower towards 1.1185 level, which is extended by the 50 EMA level. On the higher side, resistance holds at 1.1315 level today.