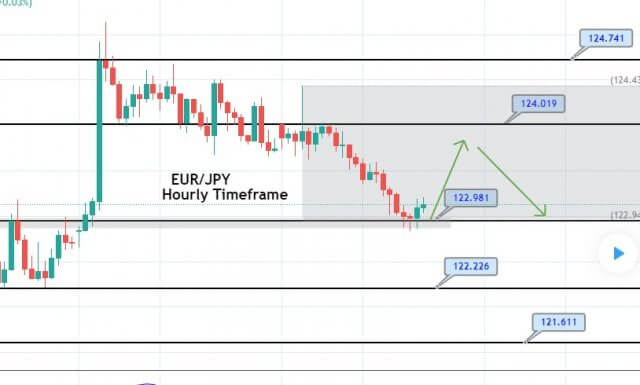 During Thursday’s Early European trading session, the EUR/JPY currency pair failed to stop its early-day declining streak. They took further offers around below 123.00 level mainly due to the intensifying coronavirus (COVID-19) cases in the U.S., Europe, and some of the notable Asian nations like Japan, which eventually exerted downside pressure on the market trading sentiment and contributed to the currency pair losses. As a result of worsening coronavirus (COVID-19) cases in Europe, the Eurozone started to face the risk of a renewed economic contraction, which tends to undermine the shared currency and contributes to the currency pair losses. Apart from this, the geopolitical tensions between China and some notable countries like the U.S. added a burden around the equity market.

The downbeat market sentiment tends to underpin the safe-haven Japanese yen and contribute to the currency pair losses. On the contrary, the optimism about promising vaccine trial results helps the market trading sentiment limit its deeper losses, which might support the currency pair. As of writing, the EUR/JPY currency pair is currently trading at 123.12 and consolidating in the range between 122.83 – 123.19.0.

The intensifying market worries regarding the continuous surge in new coronavirus cases in Europe and the United States keep fueling the doubts over the global economic recovery through imposing back to back lockdown restrictions on economic and social activity, which eventually weighed on the market trading sentiment. As per the latest Johns Hopkins University report, the global cases crossed 56 million figures, of which 11.5 million are in the U.S., along with nearly 250,000 deaths, almost one-fifth of total global deaths. Not only from the U.S. but Tokyo also alarmed investors. As in result, New York restricts personal presence at the schools while Japan alarmed alerts in the capital after the daily cases rise crosses 500 on November 16. It is worth mentioning that Japan’s COVID-19 claims raised past-2,000 for the first time since the virus outbreak began. At the same time, Germany reported 22,609 new coronavirus infections, the 3rd-highest daily hike on record. Two hundred fifty-one deaths were recorded, as the total fatalities reached 13,370 so far. This, in turn, exerted downside pressure on the market risk tone and contributed to currency pair gains.

Apart from this, the bearish market sentiment could also be associated with the long-lasting US-China tussle, which continuously picks the pace. As per the latest report, the U.S., U.K., and Australia recently released a joint statement showing their disappointment over the Dragon Nation’s performance in Hong Kong. The global policymakers urged the Asian major to respect international commitment while urging to stop threatening Hong Kong peoples.

On the other side, the Eurozone has been facing the risk of a renewed economic contraction, sparked by the second wave of the coronavirus accelerating in Europe. As in result, the consumer prices are already declining in a worrying sign for the European Central Bank, which is already running an ultra-accommodative policy and has chances to give a dovish surprise.

Looking forward, the traders will keep their eyes on U.S. Unemployment Claims along with Philly Fed Manufacturing Index. The release of Switzerland Trade Balance will be key to watch. Across the pond, the ongoing drama surrounding the US-China relations and updates about the U.S. stimulus package will not lose their importance.