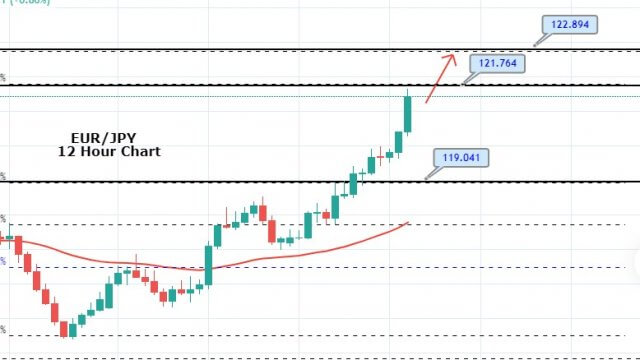 The EUR/JPY is trading with a bullish bias at 121.400 after placing a high of 121.556. Overall the movement of EUR/JPY remained bullish throughout the day. The pair EUR/JPY started its week on the front foot as the Japanese yen faced pressure despite the increased protests across the US, which lead most of the investment into the European markets.

Tens of thousands of protesters returned to the streets of cities around the US despite curfew orders on Monday. The protests were against the killing of George Floyd, a black man in police custody. Angry protests continued nationwide a week after George Floyd’s death.

On the data front, at 4:50 GMT, the Capital Spending for the quarter from Japan was increased by 4.3% against the declined forecast of 5.1% and gave strength to JPY. At 5:30 GMT, the Final Manufacturing PMI for May came in line with the expectations of 38.4 from Japan.

The stronger than expected data from Japan gave strength to the Japanese Yen and added in the downward pressure of the EUR/JPY pair, but the release of Spanish Unemployment Change from the Eurozone extended solid support the EUR/JPY, pushing it higher to highs of 121.600.

Technically the EURJPY is extending higher towards resistance area of 121.760, which is extended bu Fibonacci extension level of 227.20%. The recent bullish candles in the EUR/JPY supported the buying trend along with massive histograms, which are closing over 0, supporting bullish bias. Therefore, we decided to go long at 120.116 with a stop loss of around 119.616 and take profit at 120.616.