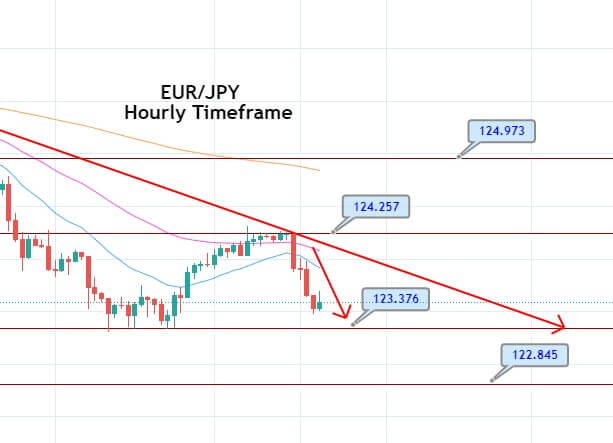 The reason for the currency pair selling bias could also be attributed to the market risk-off mood, which eventually underpinned the Japanese yen’s safe-haven demand. Hence, the risk-off market sentiment was mainly sponsored by the Fed’s hint for another stress test for large banks as well as the U.K. scientist group’s readiness for another national lockdown also weighed on the market risk tone. At this particular time, the EUR/JPY currency pair is currently trading at 123.86 and consolidating in the range between 123.81 – 124.31.

At the coronavirus front, the number of confirmed coronavirus cases increased to 263,773, with a total of 9,378 deaths reported on the day. Meanwhile, the number of new infections rose by 1,916 on Friday, while the death toll rose by 7, as per the latest data from the German disease and epidemic control center, Robert Koch Institute (RKI). This, in turn, undermined the sentiment around the single currency and contributed to the currency par declines.

Moreover, the sentiment around the shard currency was further bolstered by the reports suggesting confirmation of deflation seeping back into the Eurozone. Detail suggested the Eurozone annualized CPI confirmed the -0.2% previous estimate.

Across the pond, the market trading sentiment has been flashing mixed signals since the day started. Be it the American lawmakers’ failure to offer any positive announcement on the coronavirus (COVID-19) relief package or the recent escalation in the Sino-American tussle, not to forget the downbeat U.S. data, these all factors have been weighing on the market risk tone. This, in turn, underpinned the safe-haven Japanese yen.

The employment data released on Thursday showed that initial jobless claims dropped slower than expected at the data front. Eight hundred sixty thousand claims were filed over the past week against the predicted 850,000.

Additionally, weighing the market trading sentiment could be the fears of rising COVID-19 cases in the U.S., Europe, and some of the notable Asian nations like India, fueling fears that the economic recovery could be halted.

Looking forward, the market traders will keep their eyes on the USD moves amid the lack of major data/events on the day. However, the U.S. Michigan Consumer Sentiment Index for September, which is expected 75 versus 74.1 prior, will likely help resolve near-term USD moves. Furthermore, the risk catalyst like geopolitics and the virus woes, not to forget the Brexit, will also be key to watch for the fresh direction.


We decided to open a sell position in the EUR/JPY pair during the European session as it formed a bearish engulfing pattern below 124.250 level. The candle closing drove more selling in the EUR/JPY pair, and now it’s likely to trigger more selling until the 123.375 level. The MACD and 50 EMA were also supporting selling bias; therefore, we decided to capture a quick sell position to target 123.742 take profit level. Let’s keep an eye on 123.3750 now as the closing of candles above this level may drive some buying during the U.S. session. Good luck!