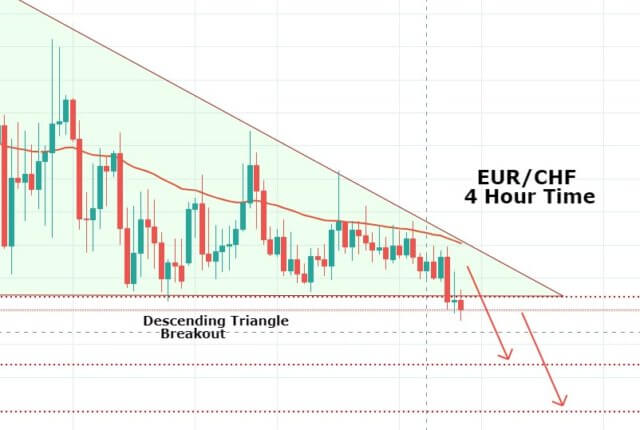 The EUR/CHF is facing stiff resistance around 1.05440, which is mostly extended by a descending triangle pattern that has already been violated. This may drive the EUR/CHF pair further lower until the next support area of 1.0502. The Euro as a signal currency is still staying bearish in the wake of an increased number of COVID 19 cases around the globe.

Most of the selling in the EUR/CHF pair triggered after the Eurozone money market rates crawled lower from four-year speak. It’s a hint the Euribor benchmark may be beginning to counter to European Central Bank measures aimed at reducing the funding rush beyond the single currency bloc. Declines in the oil prices could be recovered during the day ahead, mainly due to the risk recovery in the market, as the coronavirus cases are showing some sign of a slowdown in global economies.

The 50 EMA and the descending trendline is weighting on the cross pair, and it may drive selling bias in the EUR/CHF today. The violation of 1.0540 level can extend the selling trend until the next target level of 1.0520 and 1.0509. Good luck!