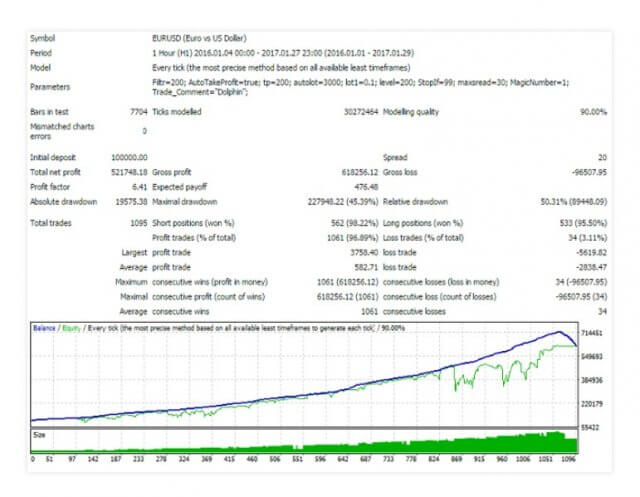 This EA belongs to the Grid strategies with integrated averaging. It is developed for the MetaTrader 4 platform by Sergey Kruglov from Russia. The initial version was published on 6th February 2017 on the MQL5 market set in the paid category. It is updated once in late 2017 adding a few functional averaging parameters such as Averaging Point, Averaging Take Profit points, and Auto Averaging. Sergey Kruglov has 26 other products on the market but none of them have any notable ratings or popularity. He seems to develop mostly Grid-based EAs.

Averaging is a knows method that aims to cut the cost by opening new positions in the same direction as the trend generates losses. The logic is when the trend reverses a trader will have a lower average price entry that the initial and therefore have a shorter range to breakeven. It is also assumed there is an increasing probability of trend reversing as it is breaking through key price points. Dolphin EA Grid strategy seems to be a classical one, orders are located and separated at specific points. The Overview page does not mention a single feature or formula that could make it easier for the trader to understand how the EA works. One fact is certain, the EA does not have Stop Loss orders, only Take Profit. Since the averaging is used instead, Stop Loss orders do not have a logical purpose here.

Dolphin EA does not have any specific currency pairs or timeframes it excels in. Therefore, results could vary from extremely high losses to profits. The performance measuring will give you a lot to tinker with, even it is completely unknown what filters and indicators are used, several key settings are affecting the final result. Filter setting, for example, defines the range in points from the average. Then the mentioned averaging parameters that were introduced with the final version 2.0.

Based on other settings such as StopIf, Dolphin EA does have a sort of Risk Management, using the drawdown percentage. This setting will define the maximum drawdown level beyond which no more orders will be opened. Customizable MaxSpread filter is implemented so you can avoid news events or other high volatility moments. Money Management ability is defined by the AutoLot setting that defines the currency balance amount at which the EA will open 0.01 lot. It is simple, does not account for the volatility. 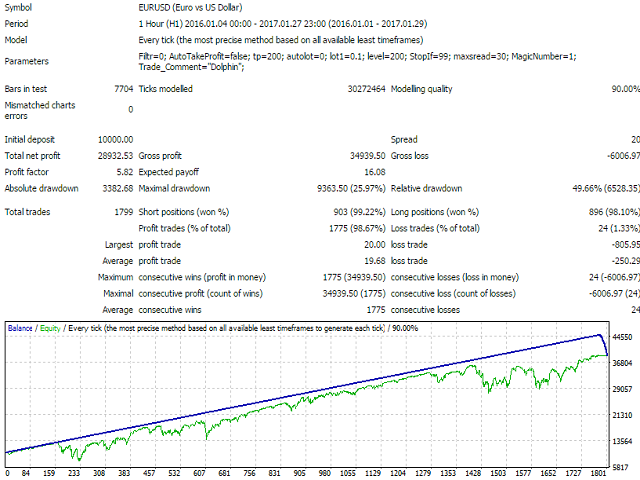 The performance screenshots show great results, expectedly, but there are some important figures. There are 2 screenshots based on the H1 timeframe on the EUR/USD pair calculated for every tick for approximately one year. The difference between the two is only in the settings presented and very different results, although both are profitable. The better performing test had Filter, AutoLot, and AutoTakeProfit defined while the other test had fixed lot management and other setting off. Modeling quality is 90%, Maximal Drawdown is a very high 45.39%. Dolphin EA also has a very high number of profit trades 96.89% but as it uses a high-risk strategy, the average losing trade is -2838 and average profit trade is five times lower 582. The final result is a fivefold gain relative to the initial deposit.

Dolphin EA has a published signal link in the comments page but it has been shut down, most likely because of the much different performance in real-time. However, the p[rice of this EA is only $40 with 5 activations and no option to rent. A demo is offered and has been downloaded only 149 times, meaning the popularity is low.

There are no comments left by users except by the author himself. Dolphin EA is unlikely to achieve the results published, as with most EAs, serious testing in real-time is needed and the author has not presented this on any benchmarking sites. There are more interesting EAs with more transparent results and descriptions.

This Forex service can be found at the following web address: https://www.mql5.com/en/market/product/20697