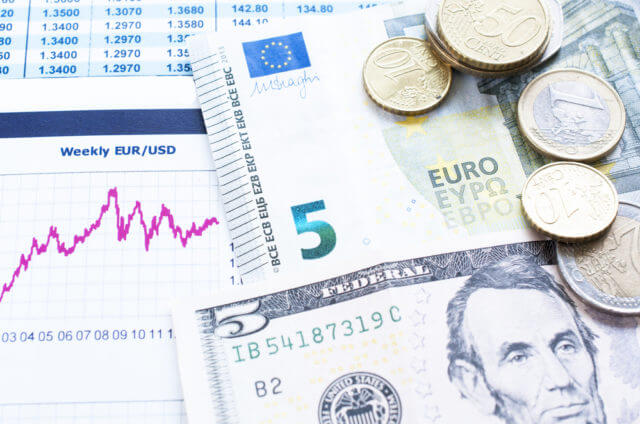 The Dollar Index dropped 0.4% on the day to 98.68 on Thursday, as Brexit deal hopes boosted the Euro and the British pound. Meantime, U.S. President Donald Trump said journalists on Thursday: “We just completed an agreement with China, we are doing very fine, we are having another one tomorrow. I am reaching with the vice-premier over at the White House, and I think it is going well.”

Official data revealed that U.S. consumer prices were even on month in September (+0.1% anticipated and in August). The U.S. Labor Department announced that initial jobless claims amounted to 210K. Following today, U.S. import is predicted to be stable for September versus -0.5% in August. The University of Michigan Sentiment is supposed to get in at 92 for the October preliminary reading versus 93.2 in September.

As of writing, the EUR/USD currency pair took 0.16% gains in the Asian hours as traders sold greenback on trade optimism and announce that the United States is planning to start the currency deal with China. On the other hand, the report came that President Donald Trump may issue a license that will permit a few companies of the United States to supply products to Chinas Huawei.

At the ECB front, the European Central Bank meeting regarding monetary policy is scheduled to happen at 11:30 GMT.

The Central Bank reduced its deposit rate by the 10-basis-points to -0.50% during September and also announced a new bond-buying plan that is scheduled to start from November.

Distinctly, the EUR currency may take a buying trend if the ECB meeting underscores the growing dissent within the Governing Council. Moreover, the EUR may come under pressure and hit the bearish bias if the meeting reports increased odds for more rate cut.

The pair is currently trading at 1.0987, 21-day moving average. The technical line has been closing bullish move since October 3, and this level is considered as a support for the buyers.

A close above the key Moving Average would open the doors for a stronger corrective bullish move, possibly to 1.1110 (September 13 high).

Today consider staying bullish 1.1025 as the EUR/USD may stay bearish below and bullish above this level.

The USD/JPY currency pair hit the session high of 108.13 and increased more than 20 pips and presently trading at 108.04, due to President Donald Trump’s positive comments related to trade talks.

President Donald Trump’s comment that the trade talks with China are going well and that a deal could be reached on a positive outcome.

On the other hand, the demand or the anti-risk Japanese Yen declined due to the United States President Donald Trump’s positive comment related to trade talks.

The futures on the S&P 500 are presently showing 0.15% increases. The index increased by 0.64% on Thursday, due to trade talks continued, denying reports released in the Asian trading hours, which said Chinese officials could cut short their visit.

Asian equities are flashing green at press time. Japan’s Nikkei is currently risen by 0.87%, and Hong Kong’s Hang Seng is increased by 1.26%.

We should also take note that the USD/JPY currency pair could continue its bullish trend if the trade talks finish on the positive outcome. President Trump will meet with Chinese Vice Premier Liu later today.

The USD/JPY may mark a critical resistance at 108, which is extended by the 78.2% Fibonacci retracement levels. On the lower side, the USD/JPY may get supported at 107.720. The bullish violation of 108 can drive USD/JPY towards 108.54. Consider taking sell positions below 108 and buying positions on the breach of 108 to target 108.450.

The GBP/USD currency pair now found on the bullish track and was seen while consolidating in the narrow range, just below mid-1.2400s in the Asian session. Moreover, the eyes will keep on the resumption of the European Union and the United Kingdom Brexit talks.

The GBP/USD currency pair took some aggressive buyings and printed its highest % gains since March amid repeated Brexit certainty. Moreover, the GBP is considered as the best performing major currency after the Irish PRimme Minister Leo Varadkar said that a Brexit agreement possibly would be closed by the end of October.

After a 3-hour meeting with United Kingdom Prime Minster Boris Johnson Regarding Brexit, Varadkar said that they have identified a possible way forward on the Irish border issue and how to avoid a hard border.

Despite the positive trade headlines and an aggressive uptick in the United States Treasury bond yields, the U.S. Dollar failed to gain any rest. The currency is still depressed due to increasing chances of another rate cut by the Federal Reserve at its coming meeting, which is scheduled for 29-30 October.

The GBP/USD pair recovered almost 250 pips, taking along with some trading stops being located near the 1.2300 levels and the 1.2345 and 1.2350 supply zone, and got further support from the prevalent greenback selling bias. The GBP/USD trade at 1.2480 right below the strong double top resistance. The overall trend appears bullish as the GBP/USD can proceed to trade higher.

Consider keeping an eye on 1.2490 level to take a sell position below this and buy position above the same standard to capturing 30/40 pips.