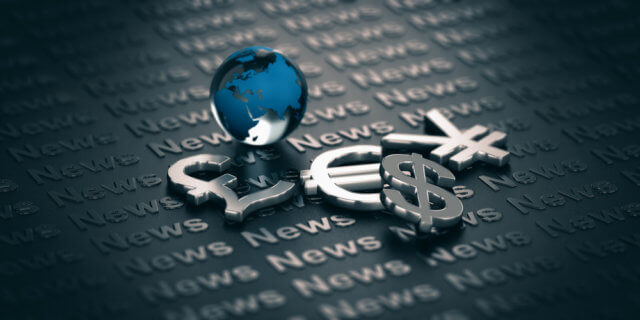 On the forex front, the U.S. Dollar Index dropped 0.6% on the day to a three-week low of 98.39, as the European Central Bank played down the impact of the coronavirus outbreak. Meanwhile, Chicago Federal Reserve Bank President Charles Evans said the Fed “must be prepared to rely on unconventional tools” in the event of a recession.

The EUR/USD surged 1.1% to 1.1001. European Central Bank President Christine Lagarde said the Coronavirus was not yet at the stage where monetary policy response is required. On the other hand, official data showed that the Eurozone’s Economic Confidence Index climbed to 103.5 in February (102.8 expected) from 102.6 in January.

The dollar has traded near a three-month high against the Euro as worries over the outbreak of Coronavirus has driven sharp volatility in the market, mostly driving dollar prices higher.

The Euro has tried to rally higher during the Asian trading session on Thursday but continues to encounter resistance above. We are in a strong downtrend, and the EUR/USD is exhibiting correction of that downtrend as it could lead the EUR/USD prices towards the next target level of 10925.

The EUR/USD is consolidating near 1.1016, as the pair seems to go further higher after violating the 61.8% Fibonacci retracement at 1.0970. Chances of further buying in the EUR/USD remains pretty high until 1.1020 and 1.1065. The pair may find immediate support around 1.09540, which is mostly extended horizontal support level. The MACD and RSI still remain on the bullish side and are signaling odds of more buying in the pair. The EUR/USD may find resistance around 1.1020 and 1.1065, so let’s look for bullish trends above 1.0963.

The GBP/USD erased early gains to close down 0.1% at 1.2888. The British government said it might start planning for a no-deal Brexit if a trade deal with the European Union is not apparent by June.

The U.K. government is expected to publish a negotiating mandate for the future relationship with the European Union. James Slack, the Prime Minister’s spokesman, told reporters: “At the end of this year we will regain in full our political and economic independence.” On the other hand, it is reported that the government might delay its budget decision, which is scheduled for March 11, amid uncertainty over the economic outlook.

The outbreak of the Coronavirus has directed some traders to think central banks will be required to go after dovish monetary policy to support the economy against the potential threat of a coronavirus. The Sterling is still trading with a bearish bias as the interest rate cut sentiment from 0.75% to 0.50% remains pretty solid.

Prime Minister Boris Johnson’s Tories succeeded December’s election, extending his hold on parliament and pushing some Brexit risk, the Sterling was trading near 83 pence per Euro, and it also gained some support against the U.S. dollar.

In the U.K., the Nationwide Building Society will publish its house price index for February (+0.4% on month expected).

On Friday, the GBP/USD continues trading with a mixed bias, following a narrow trading range of 1.2980 – 1.2880. As we can see on the 4-hour chart above, the Cable has formed a descending triangle pattern which is supporting the Sterling around 1.2880. It’s one of the most crucial trading levels as a violation of this can open further room for selling until 1.2795 area. Alternatively, the GBP/USD has the potential to go after 1.3070 if it manages to trade above 1.2960 support. The MACD and RSI are holding in the selling zone, supporting bearish bias for the GBP/USD pair. Let’s look for selling trades below 1.2966 and bullish above the same level today.

The Coronavirus is growing in the Middle East, Europe, and another area of the world, as Brazil verified its initial case in Latin America, while other regions of China found to lower their emergency response level as the number of new cases recorded there proceeds to reduce.

The Greenback is now trading with a slightly bearish bias amid forecasts that the U.S. Federal Reserve may lower the interest rates this year to control downside influence on the economy produced by China’s coronavirus outbreak.

The U.S. official data showed that the fourth-quarter GDP (second reading) grew 2.1% on the quarter (as expected). Durable goods orders (preliminary reading) declined 0.2% on month in January (-1.4% expected). The number of initial jobless claims rose to 219,000 in the week ended February 22 (212,000 expected). Consequently, the USD/JPY is trying to gain support in the wake of positive economic data.

The USD/JPY continues with its bearish momentum on Friday in the wake of weakness in the U.S. dollar and stronger Japanese yen. The USD/JPY pair is holding trading dramatically bearish at 108.875, and it has high odds of going towards the next support level of 108.338. We can see on the 4-hour chart above, the USD/JPY has formed a bearish engulfing pattern below 109.650, which may trigger further selling until 108.338. We need to keep an eye in the USD/JPY as the closing of candles above 108.338 level can help us secure a buy trade with a take profit of around 109.650.