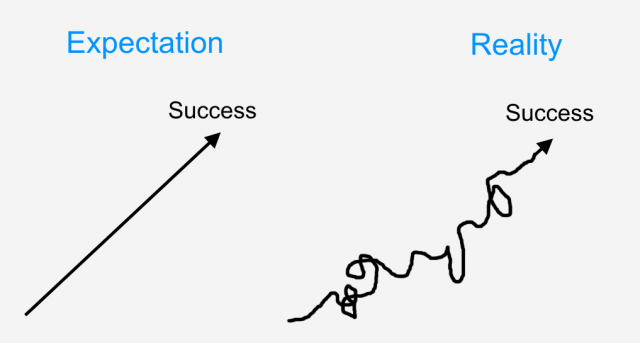 Cryptocurrency trading is starting to take off, it is becoming more and more accessible with far more brokers now beginning to offer it as a tradable asset. While it is very similar in its function to forex trading, coming over from forex to cryptocurrency trading can have a lot of changes and a lot of differences than you may not be expecting. The same with looking at it from the outside, it may look like one thing but actually behave in a very different way. Due to this, we are going to be looking at some of the differences between the expectations and the realities of trading cryptocurrencies that you may think of or experience when eventually starting out.

A lot of people believe that trading cryptocurrencies can bring a lot of profits, huge profits, especially when comparing it to things like forex. From the outside, when you look at things like social media, you can see people posting pictures of their supposed results, some of them are ridiculous making thousands per day. While it is possible, the majority of these screenshots will be fake or on demo accounts. There are those that can make a lot, and we mean a lot, but those cases are a lot rarer than they may look like or from what you are being told.

There Are some big profits to be made, some very big profits especially if you manage to catch one of the cryptocurrencies when they are on one of their large and long trends. The problem is that in order to make a lot of money, you will also need to risk a lot. The more you trade the more you can make, but then again, the more you trade the more you can lose. Those that are making a lot of money either have very large balances or they are risking far more than they should be with each trade and they could very easily lose it all rather than make a profit. So yes, profits can be large, but you will be risking a lot to get them.

Expectation 2: Only bitcoin to trade

Bitcoin Is the big cryptocurrency, it is the one that is in the mainstream media and it is the first one that the majority of people think about when you mention cryptocurrencies. So either through the fact that they do not know any others or the fact that it is the most popular, a lot of people who do not do currency trade may think that Bitcoin is the only cryptocurrency available to trade, the good news is that this is simply not the case.

There are a lot of tradable assets when it comes to cryptocurrencies, both coins, and tokens. There Are a lot of brokers that are now beginning to offer crypto trading and even some brokers popping up that are specialising in it. These brokers are offering a lot more than just Bitcoin to trade, in fact, some of them now offer over 30 different pairs and cryptocurrencies. This number is continuing to grow as the industry does too. So while Bitcoin may be the popular one and the one that is traded the most, there is a lot of choices out there should you wish to try trading something different.

Expectation 3: Hard to get into

A few years ago, it was pretty difficult to buy cryptocurrencies, you had to go through a third party service or to buy from an owner directly, it was difficult to do, there were large fees and there were a lot of risks as no one could guarantee that you would get the coins after payment. You also needed to buy whole coins at some point which is thankfully not a thing anymore. The good news is that with the improvement in the infrastructure and technology it is no longer anywhere near as hard to get into.

Cryptocurrencies are becoming increasingly accessible for pretty much anyone. When it comes to trading the coins, h accounts that you open only need a deposit as low as $10 so people are no longer being priced out. There are also a lot of brokers that are offering it, from the big well-known brokers to new more specialised ones that are there only for crypto trading, some of which allow you to begin even without doing all the KYC stuff that a lot now require. If you are looking to get into crypto trading then it is very easy and very quick to do.

Crypto trading looks and feels very similar to forex trading, yet people seem to have the impression that it is far easier to predict, most likely due to the fact that it is not controlled by banks. Due to this, they think that it will be easier to work out whether the markets will go up or down. This impression could have come from the fact that the crypto world is still very new and so in the long run the prices have only been going up. While it was easy to predict the rise, it was not easy to predict the hundreds of drops that were in there too.

Reality 4: It’s influenced by whales but also the news

The problem with predicting the markets in the crypto world is that they can very easily be influenced by the larger holders. In fact, there have been plenty of times where the price has been stopped at the top or bottom by larger players placing millions and millions there in order to stop and influence the price. While a single person cannot influence it, a group of them can, which means that it is slightly harder to predict as a decision can be made at any time and the whales put their money in. The news can also have a huge effect, a major business taking it up or a country banning it can cause the price to jump and to really jump, thousands of dollars at a time, which can, unfortunately, catch a lot of people out.

Those are just some of the differences between the expectations and the realities of what people think and what actually is. The expectations are often seen through things like social media or the news which often only gets half the picture, when you start trading you will find that things are pretty different. Of course, some things will probably be pretty similar, but it is important to come into it with a clear mind and no expectations stuck in your head which could lead to disappointment.