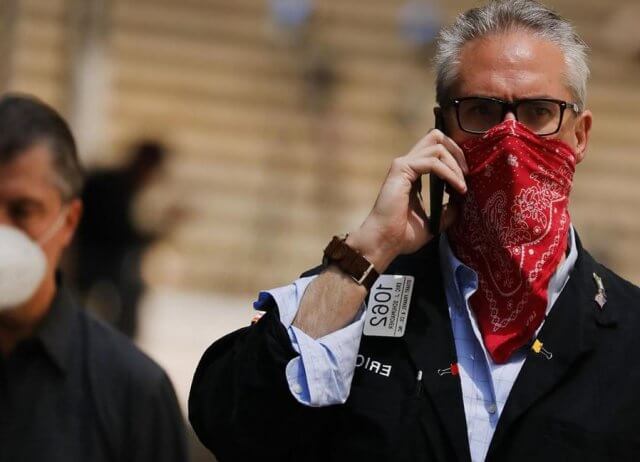 The coronavirus epidemic appeared in January 2020, but markets reacted with a collapse only at the end of February. Until then, the epidemic once widespread in China was considered local. But after the emergence of an outbreak in Italy and many other new cases in Europe, it ended the patience of traders. If we look at the context of a profound fall in production, and a break in economic ties and, Dow Jones lost more than 20% in just 3 weeks. Has the fund been reached yet? Is the coronavirus so terrible? What are the Dow Jones’ prospects for the future? Let’s try to answer the questions raised in this article.

From February 21 to March 12, in just under 3 weeks, Dow Jones has lost more than 20%, plummeting from an all-time high of 29551-29219 to 23553. During the last week of February, the world market lost 5 trillion dollars. In capitalization, the US stock market lost 1.7 trillion US dollars. Financial Times rated the first week of panic as the worst since the 2008 crisis.

Finally, an imminent coronavirus epidemic was discussed in January this year, when China began to record a truly dramatic increase in the number of people infected. The epidemic partially affected several countries in Asia, but US stock markets did not respond to this, and on February 18, Dow Jones updated its record high to 29,551. Investors felt that the epidemic was local, not dangerous, and would soon be taken under control.

Expectations for a quick solution to the epidemic were not met. On 21 February, the Italian authorities reported the first six cases, the following day there were 50. This was enough, and investors immediately withdrew their capital from all world markets for fear of the further spread of coronavirus. The mass-selling panic continued during the following week.

At the end of February, it was hoped that the would almost reach and the thaw would begin. At that time, according to WHO, the number of new cases recorded daily was decreasing, and markets took the news positively. In early March, Dow Jones even climbed a bit. And perhaps the upward movement could continue, were it not for the dispute between OPEC and Russia.

Saudi Arabia, interested in maintaining the agreement, practically declared a price war. Saudi Aramco Corporation was instructed to offer customers record discounts (6-8 dollars per barrel). As of April 1, Riyadh will dramatically increase oil production from 9.6 million to 10, 11, and 12 million barrels per day.

There is information indicating that Russia will seek to remove US oil shale production from the market, as it ceases to be profitable when the price of oil is less than USD 40. There were also vague indications in the Russian media recently that the rouble should weaken slightly. In other words, this scenario was predictable.

What Steps Should Investors Take Now?

The current situation with the expansion of coronavirus in Europe is still quite tense today. According to WHO statements, in Europe cases are increasing. Italy remains the country most affected at the moment. On March 10, the country registered around 1000 new cases of the disease and 168 deaths, the country is now under lock and key. Ukraine, Poland, the Czech Republic are entering quarantine. Cases of the disease have already been reported in Turkey, Georgia, Bolivia, Panama, and Jamaica. Analysts believe that in developing countries (e.g., CIS), statistics could be even sadder because, for various reasons, coronavirus cases can be diagnosed as regular flu or simply hidden.

But not everything is so bad. China has officially declared that the coronavirus epidemic is fading in the country. The growth rate of the disease in recent days is 0.023%, the number of new cases of coronavirus is 10.03, 74% of those infected have already recovered, 16 temporary hospitals have been closed.

Although WHO has described the outbreak of coronavirus as a pandemic, the organization admits that the common flu occurs every year and that between 40 and 45 million people are infected, 600,000-650,000 of them die from the flu or its complications. WHO fights with new types of viruses every year, however, this does not result in such a dramatic collapse of markets, panic, and quarantine.

Based on the above, there are certain unknowns:

Who will benefit from the coronavirus-fueled panic? Corporations lose billions, transport communications (logistics, tourism) are interrupted, production volume decreases. But, if the coronavirus mortality rate is 3.4% (WHO data), and the flu/pneumonia mortality rate is 7.1% (CDC data, USA), could the problem be exaggerated? Although statistical data can be skilfully manipulated, only the coronavirus can be compared with influenza or tuberculosis.

Is the coronavirus the most important reason for the Dow Jones accident? Was the pandemic just a trigger? Could it be the last straw in the US stock market that had been pushed extremely hard before?
The solution to these unknowns will give us a clue about the future of the global stock market, including Dow Jones.

Optimistic: It took China two months to fight the epidemic. The coronavirus is at its peak in Europe, so the situation will be uncertain for at least a month. During this time, the Dow Jones can lose another 10% or more in a panic and drop to 2018 levels. Given the performance of the index in recent years, things are not so bad.

WHO officials point out that the epidemic in China may have begun to decline due to warming, as the virus is supposed to die at high temperatures. The world community should therefore begin to calm down as early as May. Meanwhile, Russia and Saudi Arabia should agree on oil prices (no one benefits from current oil prices), so another problem of geopolitical and trade uncertainty will be solved. The US shares that reached the bottom in May should roll back to historic highs again, amid optimism, the resumption of trading and economic activities, and increased business activity. Although the shares will barely cover the losses quickly, investors, having entered long positions at the lows, will be able to earn 15-20% from Dow Jones alone.

Pessimistic: Panic in the midst of the coronavirus pandemic will fade, yet it will be remembered for a long time. Despite the injection of cash from central banks, the global community will not quickly restore the previous pace of economic growth. That’s why stock markets will recover very slowly if they do. Dow Jones’ situation is even more complicated. Analysts predict that the US stock market is overheated. According to wave theory, a long-term crisis should now begin. And if at the end of February the recession could be called local, there is now a bearish trend. The bearish trend could be strengthened in the midst of the US presidential election this fall. At best, Dow Jones will shrink further and consolidate at the bottom until the end of the year. In the most tragic scenario, the situation in 2008 can be repeated.