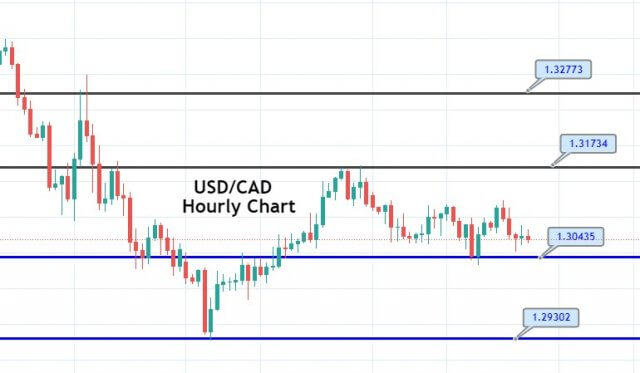 The USD/CAD closed at 1.30858 after placing a high of 1.31174 and a low of 1.30341. The USD/CAD pair declined on Wednesday amid the broad-based US dollar weakness and the Canadian dollar’s strength on the day. The risk sentiment was improved on Wednesday after Pfizer and BioNtech said that their vaccine was 95% effective in their study. They were going to seek approval from the US for emergency authorization of vaccine in the coming days. This news raised optimism in the market that vaccines will be delivered soon and would help the global economy recover.

The rising risk-sentiment in the market helped risk perceived Canadian dollar gain traction against the US dollar that ultimately added pressure on the USD/CAD pair. Meanwhile, the US dollar was already weak across the board after the chances for a further stimulus package from Congress increased after House Speaker Nancy Pelosi and the Senate Minority Leader Chuck Schumer urged the Senate Majority Leader McConnell to start the talks for fiscal aid.

The US was reporting a rising rate of infection cases that were weighing on its local currency as the virus’s spread was costing record lives. According to Johns Hopkins University, the death toll in the US raised to 250,180, and the fears for economic shutdown to control the virus from being spread increased. The US officials also announced to close the New York schools again from Thursday to fight the pandemic.

The inefficiency of Trump’s administration during the pandemic crisis has cost the United States many American lives. The recent Trump’s refusal to give in his presidency to Joe Biden has also created chaos in the economy has weighed heavily on the US dollar. The US dollar weakness added further to the losses of the USD/CAD pair on Wednesday.

From the Canadian side, the Consumer Price Index for October rose to 0.4% against the expected 0.2% and supported the Canadian dollar that weighed on the USD/CAD pair. The Common CPI for the year also surged to 1.6% against the anticipated 1.5% and supported the Canadian dollar that added losses in the USD/CAD pair. The Median and Trimmed CPI for the year came in line with the expectations of 1.9% and 1.8%, respectively.

The USD/CAD pair is trading over the 1.3060 level, mostly supported by the Retail Sales. A bearish breakout of the 1.3040 level can drive the selling trend until the 1.2935 area. While on the other hand, the resistance stays at the 1.3173 level today. The MACD and RSI support the selling trend; thus, we may consider taking a selling trade only upon the breakout of the 1.3055 level and buying over the 1.3060 level. Good luck!