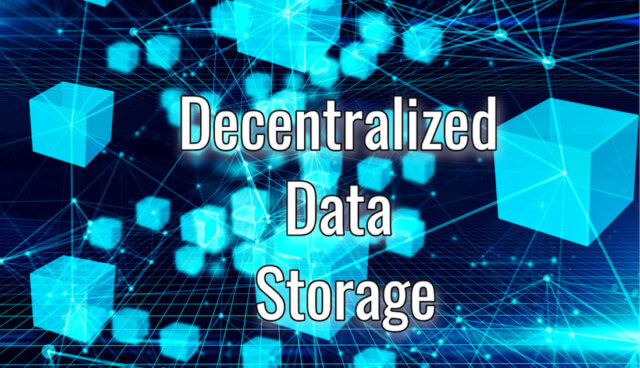 Data storage is the recording of information in a medium such as a computer or another sort of an electronic system. And decentralized storage is the storage of data in multiple servers or computers where files are protected with blockchain and cryptography. Since data is stored across a network of multiple computers, no one authority can regulate or control it.

Centralized storage represents the existing model of storing data where your data is stored on third-party servers. While the centralized storage solution has served us well since the age of the internet, it has inherent weaknesses that make it less than ideal for fast-changing customer preferences on how and when they want their data.

The Evolution of the Internet

In the early days of data storage, we stored and shared data thorough rather rudimentary devices such as floppy disks. Over the years, we progressed to CDs, hard disk drives, and so on. These had a larger space for storage, but the core concept didn’t change. You still had to move around with the data storage device, rendering your data susceptible to loss and damage.

Upon the advent of the internet, the storage and sharing of data got a new form. We can now connect with computers from all over the world and access information, pictures, and data and more anywhere and anytime. We’ve come far from the days when you had to own and maintain your own server to the current pay-as-you-use model, and then to cloud services like Amazon’s S3 that provide better scalability, security, and performance. However, despite all this progress, the current iteration of the internet is still problematic in a number of ways.

The Problems with Traditional Internet

The current centralized model of the internet renders it vulnerable to the whims of authoritarianism. An example is China, in which the online encyclopedia – Wikipedia, is blocked. Or when governments of tyrannical countries shut down the internet during an uprising. With decentralized platforms, people from such countries can still access information.

With centralized storage, companies and users usually hand over data to third party services. From then on, the data is beyond their control, as are the privacy settings protecting that data. Also, the party that you’re entrusting to store your data is more than likely only incentivized by profit. As such, they’ll make decisions that advance their bottom-line without much regard for your business model. A good example is Google’s change in the algorithm, which has put many marketing companies out of business.

Everyone knows about the Facebook and Cambridge Analytical scandal. Due to negligence by the social media giant, the Cambridge Analytica was able to put its hands on the data of millions of Facebook users and use that data to manipulate elections in several countries. The data was so eerily detailed that the psychographic profiles the company created could accurately suggest what kind of advertisement would be persuasive enough for an individual in a given location for a certain political end.

Another mismanagement debacle is the Deep Roots Analytics case in which the data firm stored details of 198 million Americans on a cloud server for almost two weeks without password protection. The data included names, email, and telephone contacts, home addresses, voter IDs, etc.

To put it mildly, centralized data storage is expensive. To begin with, renting cloud storage is expensive on its own. And when you access it over and over again, the bills pile on. Also, costs are arbitrarily determined by the hosting company with little or no say from clients, or no incentive to use the service at all.

With decentralized storage, users’ files are split across multiple nodes in the network. Since the data is stored in all those nodes, it’s more secure as there’s no single point of failure.

Liveness is a computing term to describe the ability of a system to stay up and running, even if certain parts of that system are not functioning optimally. In a centralized system, once the server fails for any reason, it brings down the entire system with it.

Rootstock is a smart contract platform connected to the bitcoin blockchain through a sidechain. It features a technology stack called Rootstock Infrastructure Framework Open Standard (RIFOS). RIFOS is currently working on a storage application called ‘RIF Storage.’ RIF will improve storage in the following ways:

On the RIF platform, you will also access several decentralized storage services such as IPFS and Swarm.

The partnership between RIF and Swarm, a distributed storage platform and content distribution infrastructure, will see to the following:

Sia is a decentralized, blockchain-based cloud storage platform. Here, users can interact with each other in a peer-to-peer (P2P), secure and censorship-resistant environment. The Sia model works this way: individuals with extra hard drive space can rent it out and earn money from it, and individuals who need storage space can lease it at little cost.

And unlike centralized storage platforms where you pay more when you access your files for more than a preset frequency, the Sia platform allows you to upload and download files however much you want, as long as the contract funds remain in place. Also, renters are protected from fraud thanks to Sia’s proof-of-storage concept that ensures hosts only receive payment when they present proof of storage.

In this peer-to-peer model, the hosts have the right to advertise their services and also turn down storage requests for data that’s too sensitive, ethically ambiguous, or illegal. On their part, renters have the right to split up their files between various hosts, increasing their safety. They can also pay extra to receive special treatment, such as faster upload speeds and other preferential treatment.

Storj is an open-source, decentralized storage solution built on Ethereum. It features a suite of decentralized applications that allow you to store and share data in a secure environment thanks to encryption, sharding, and a distributed hash table.

Sharding is a process that fragments the files so that they are shared between users in the network. Anytime you want to access a file, Storj locates all the shards and pieces them together using the hash tables. The files are encrypted before they are shared, and only the owner can access or view them. And even if one of the nodes sharing the files goes down, you can still access the file.

Decentralized storage could turn upside down the storage function as we know it, thanks to a P2P, a highly secure model, and the freedom to access info and data anywhere and anytime. These projects are some of the trailblazers in this space, and we can be assured of other projects with more amazing and user-interactive features. It will be fascinating to see how this space evolves in the coming years.