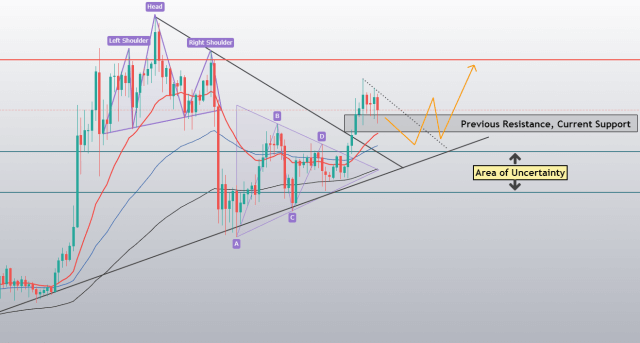 In this BTC /USD 1-day time-frame analysis, we will be looking at the most recent events, the current technical formations, as well as discussing possible outcomes.

Bitcoin has had a week of explosive gains, mostly due to its fundamentals. The US President Donald Trump announced another set of stimulus packages (while he was completely against it just before the announcement), as well as Jack Dorsey’s Square investing $50 million in Bitcoin sparked bulls’ interest and made the largest cryptocurrency by market cap push above $11,700. Bitcoin established support above its previous heavy resistance level, which is certainly another great sign for the bulls. However, one technical formation says that additional correction is ahead before the next push towards $12,000.

Bitcoin has left its triangle formation abruptly and to the upside, breaking not only the formation but also numerous resistances. The price started consolidating in a range bound by $11,300 to the downside and $11,500 to the upside, which was a great trading opportunity for traders that like sideways trading. Taking a look at smaller time-frames, Bitcoin has built a downwards-sloping channel that calls for a slight pullback (and a possible fill of the Bitcoin CME Futures gap) before pushing further up.

There are two most likely versions of this pullback, and both will be discussed above. However, an unexpected price spike or plummet is always a possibility, no matter how slim.

Bitcoin currently has two main scenarios. It can play out, and both involve a pullback before a push towards $12,000.