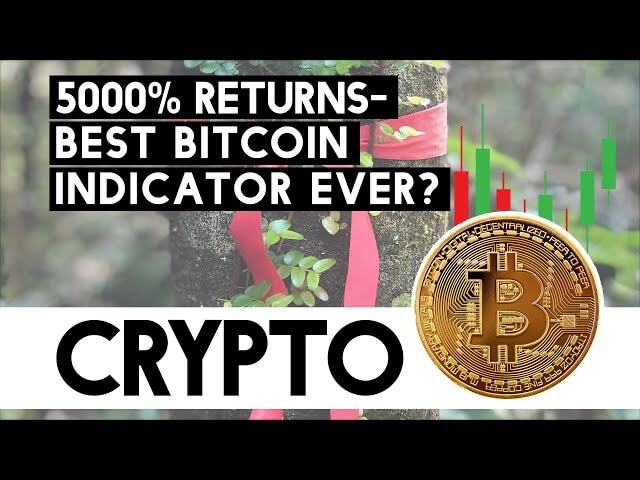 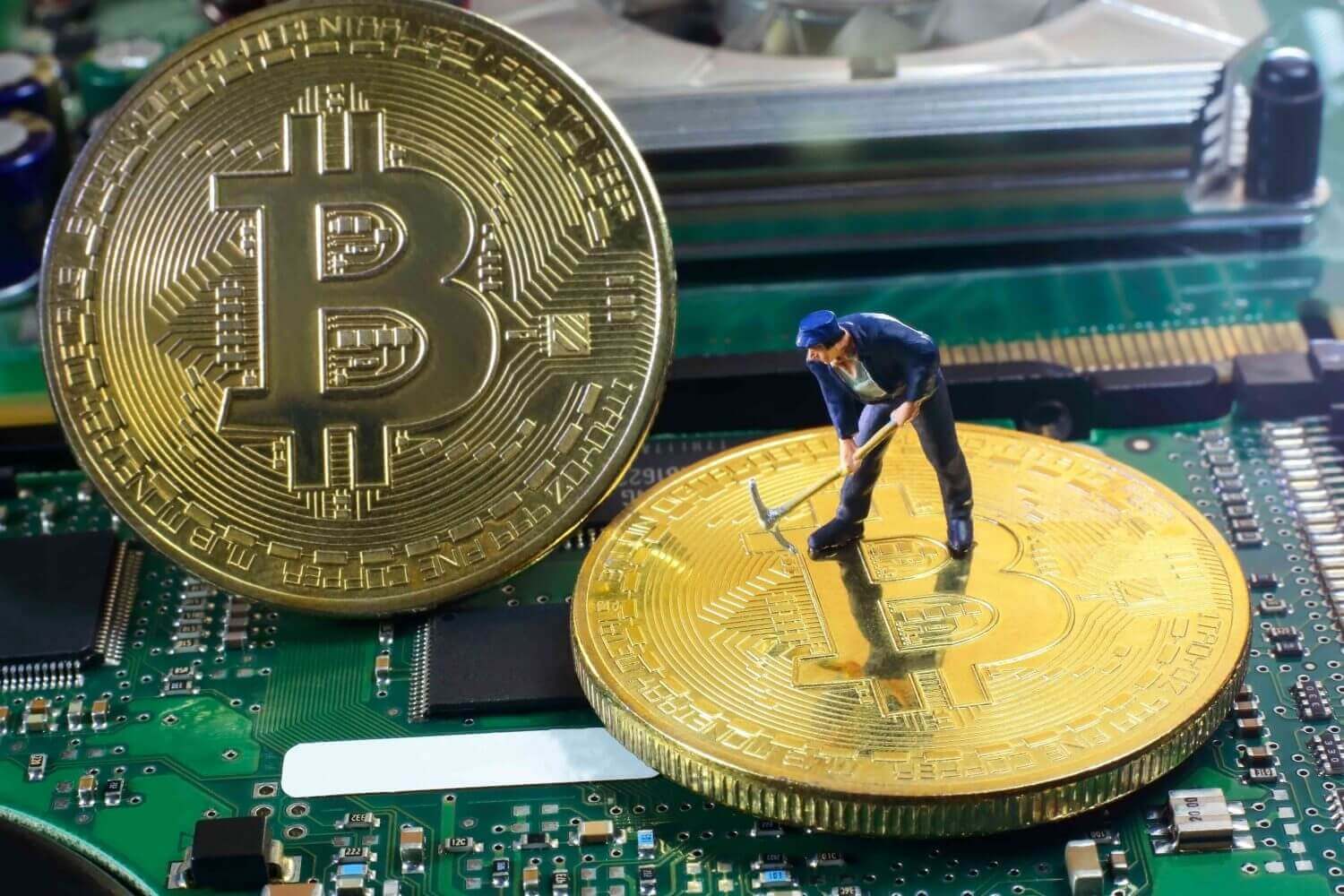 Bitcoin’s mining is adjusted for difficulty every 2016 blocks, which translates to roughly every two weeks.
However, Bitcoin’s effective Hash Rate is being calculated daily and is based on the number of blocks found by the miners each day. Because when the hash rate and mining difficulty are calculated, the difficulty effectively may lag behind the hash rate by a maximum of two weeks. The difficulty is, therefore, a somewhat lagging indicator for miner capitulation. 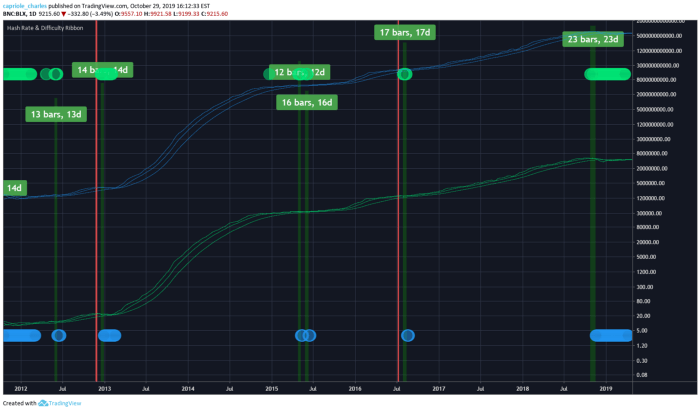 When looking at how ribbons work, we can notice the green and blue simple moving average lines of the difficulty and hash rate on the ribbon indicator. When they cross each other, miners are considered to be “capitulating.” On top of that, most times, the chart will show that there is roughly a two-week lag from the hash rate identifying miner capitulation to the difficulty identifying capitulation. The simple moving average periods chosen are not that important, and the same effect can be seen regardless of the periods used.
However, miner capitulation periods can last for weeks. As a result, the lag between mining difficulty and hash rates doesn’t have such a huge impact on the Bitcoin investor, but rather just on traders. 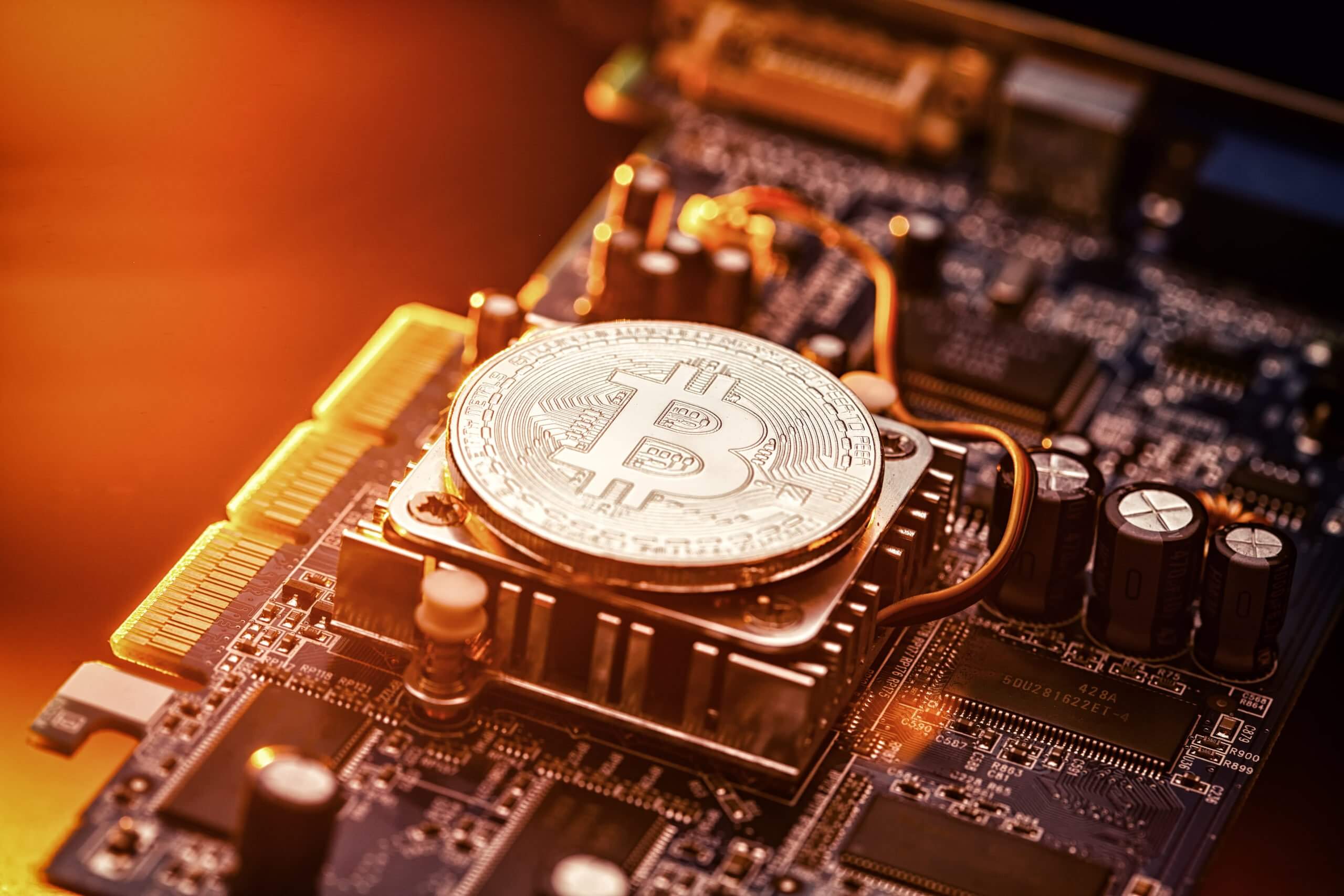 Because of the effect of negative sentiment as well as price action during bear markets and times where miners reach capitulation, the best time to buy Bitcoin is somewhere in the middle of the “miner capitulation” period. However, this cannot be fully known until after the fact.
A simple 1- and 2-month period simple moving average of Bitcoin’s Hash Rate can be used to, with great accuracy, identify market bottoms, miner capitulation, and even great times to buy Bitcoin. The moment when the 1-month hash rate SMA crosses over the 2-month hash rate SMA, the worst of the miner capitulation is over most of the time, and the recovery has begun. Initiating a buy at these points in time yields incredible results so far. 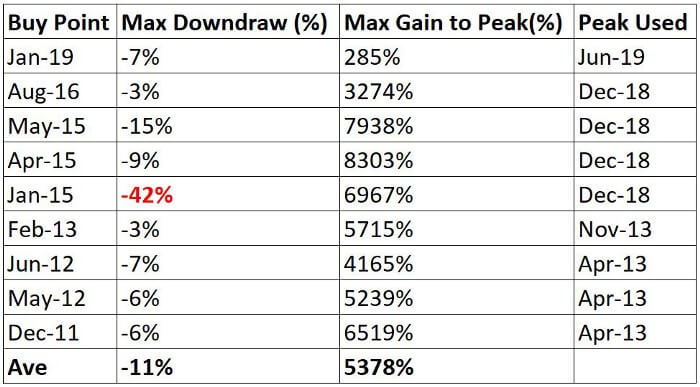 Of the 9 historic buy signals in the table shown, the average gain to the next market cycle peak, which was historically less than 3 years away, is over a whopping 5000%. Returns are even greater than shown in the table for positions held indefinitely.
What is interesting is the drawdown through all time. The average maximum drawdown for each of these entries is a mere 11%. These results are achieved without considering anything else but this indicator. No indicators, metrics, or intelligence, rather just two simple moving averages on Bitcoin’s hash rate.
We have to note that there is one “bad” purchase, which dates to January 2015, where a maximum drawdown of 42% occurred. However, this is still considerably less than half of Bitcoin’s various 80%+ drawdowns. Nonetheless, the majority of drawdowns can be eliminated by simply adding a price action indicator. This indicator could include the famous Bitcoin 10-day and 20-day SMA cross over, for example. 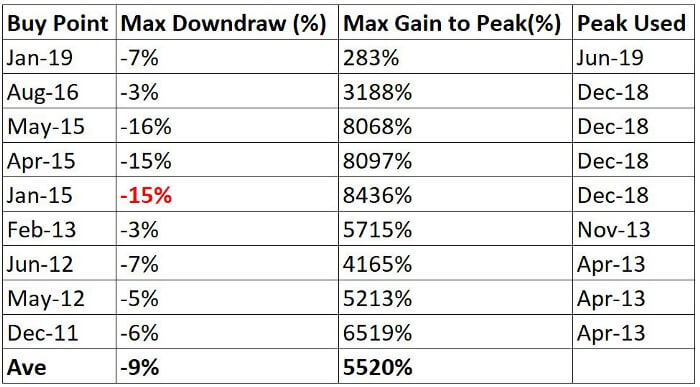 Purchasing Bitcoin during miner capitulation, as the hash rates are starting to “recover” combined with buying only once price momentum has gone positive, yields insanely good results.
As shown, the maximum drawdown is reduced significantly, while the returns have stayed relatively the same. The difference between the first and second table is made possible with the simple addition of the price momentum indicator and using these two indicators as a signal to purchase Bitcoin. 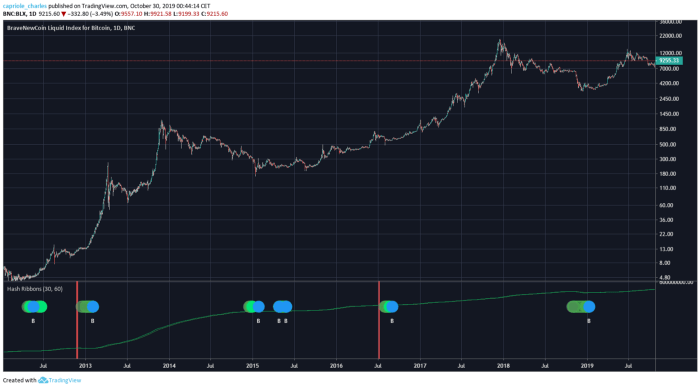 This brings us to the question of can you use this indicator often. Miner Capitulation doesn’t happen that often: in fact, it happens only once per year on average. However, it has started to occur a bit more often in 2020, which may be a great thing for Bitcoin investors. 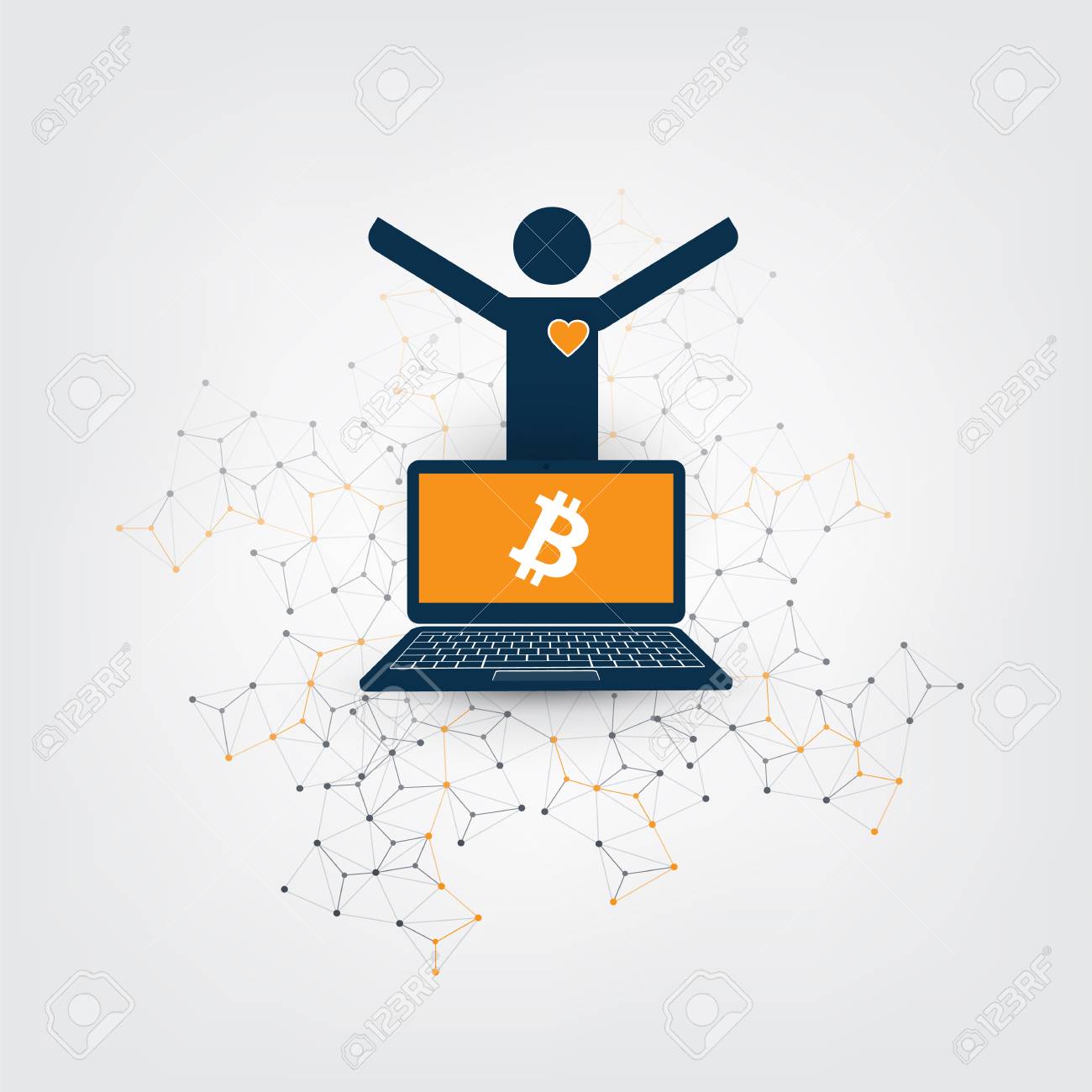 This indicator has proven itself a great tool for finding Bitcoin bottoms, while it does need help when it comes to timing the sale of the previously bought coins. Hash ribbons should be one of the key components of every Bitcoin trader’s tool belt, simply due to its amazing track record.