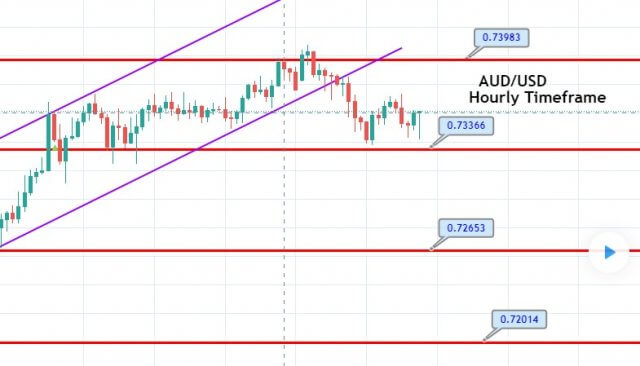 The AUD/USD pair was closed at 0.73435 after placing a high of 0.74070 and a low of 0.73388. The currency pair AUD/USD raised to its highest in 4 months on Monday in an early trading session due to improved risk sentiment failed to remain there for longer and reversed its direction as the US dollar Index raised.

The risk sentiment in the market was supported by multiple factors, including the vaccine optimism and the resumed talks in Congress for issuance of a second stimulus package. Pfizer sent its first mass shipment of coronavirus vaccine to Chicago on Monday and added in the market’s risk sentiment. Moderna also applied on Monday for emergency use authorization of its vaccine to curb the coronavirus pandemic’s effect.

These factors raised the demand for risk-sensitive Aussie and supported the upward momentum of AUD.USD pair in early trading hours of the day. However, the gains were lost during the late trading session as the US Dollar Index rebounded. The US Dollar Index (DXY) bounced back on Monday from its lower 91.8 level amid the decline in US Wall Street’s main indexes. The Dow Jones Industrial Average and S&P 500 indexes fell on Monday and added strength to the US dollar.

On the US dollar front, at 19:45 GMT, the Chicago PMI for November dropped to 58.2 against the expected 59.4 and weighed on the US dollar that capped further losses in AUD/USD pair. At 20:00 GMT, the Pending Home Sales for October also dropped to -1.1% against the estimated 1.1% and weighed on the US dollar. However, the AUD/USD pair’s losses were limited by the release of positive macroeconomic data from China. China’s economic activity in the manufacturing and services sector was improved during November and helped China-proxy Australian dollar to gather strength against its counterpart US dollar and capped further losses in the AUD/USD pair on Monday.