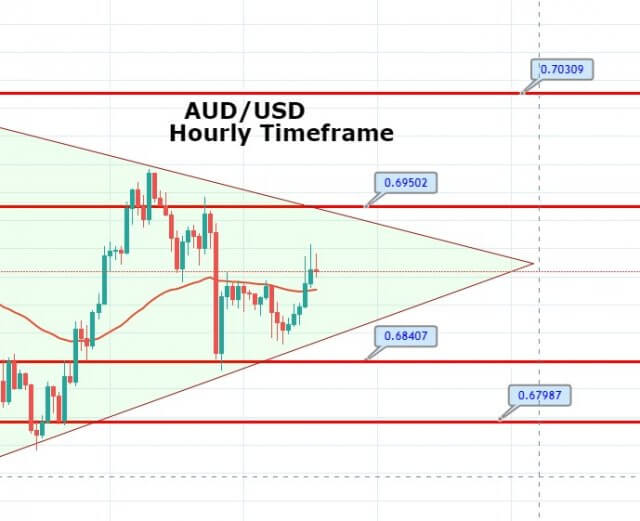 The AUD/USD pair was closed at 0.68886 after placing a high of 0.69766 and a low of 0.68332. Overall the movement of AUD/USD pair remained bearish throughout the day. The decreased risk appetite after increasing fears of the second wave of coronavirus in China and renewed lockdown restrictions to hold the spread of the virus again in Beijing.

This weighed on risk perceived Australian dollar and dragged the AUD/USD pair. The Reserve Bank of Australia on Tuesday issued its monetary policy report and provided a relatively positive outlook of the economy than its major counterparts. Furthermore, Governor Philip Lowe and the committee said that the Australian economy was facing the biggest economic contraction since the 1930s, and it was possible that the downturn would be shallower than earlier expected.

RBA affirmed that the target of 3-year yields would be maintained until progress towards full employment and inflation target of the central bank was made. Bank also acknowledged that the infection rates were declining in many countries, and if this were to continue, it could have made the global recovery faster.

On the data front, the Housing Price Index for the quarter decreased from 2.5% forecast to 1.6% and weighed on Aussie. The weaker Australian dollar moved the pair AUD/USD in reverse direction on Tuesday. On the other hand, better than expected economic data from the United States pulled the pair further on the downside. The Retail Sales for May surged by 17.7% on Tuesday from the expected 7.9% and supported the US dollar.

Strong US dollar weighed on AUD/USD pair and pair lost its previous day’s gains and ended its day with a bearish candle. On the other hand, the escalating tensions between India and China over the disputed border after a fight between both nation’s soldiers also weighed on a china-proxy currency – Aussie.


The AUD/USD is supported above 0.6850 level, and closing of recent Doji candle above 0.6850 is suggesting the chances of buying in AUD/USD. On the higher side, resistance is likely to be found around 0.6960 level. Bullish bias seems dominant today.