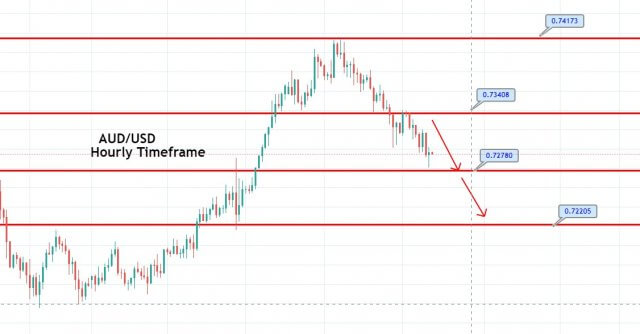 The AUD/USD failed to stop its previous session losing streak and dropped below 0.7300 level due to the broad-based U.S. dollar strength, buoyed by the Tuesday’s better-than-expected U.S. manufacturing data. Also weighing on the currency pair was the downbeat data from Australia and China. On the contrary, the market risk-on sentiment, supported by the vaccine hopes and hopes of further U.S. stimulus, becomes the key factor that helped the currency pair limit its deeper losses.

At the press time, the AUD/USD is currently trading at 0.7302 and consolidating between 0.7297 and 0.7340. Moving on, the currency pair may find some support as the ongoing rally in the U.S. dollar seems to be short-lived as the doubts remain about the U.S. economic recovery amid the weaker than expected ADP report. Australia’s July month Trade Balance registered another fundamental disappointment for the Australian policymakers. Australia’s July month Trade Balance dropped below 5400M flash forecasts and 8202M prior to the data front. Details suggest that the Imports increased past-1.0% to 7.0% while Exports fell to -4.0% from +3.0% prior.

Across the ocean, China’s Caixin Services PMI rose to 54.00 versus 50.4 expected and 54.1 before August. The same push the composite PMI data to 55.1 versus 54.5 prior. As a result of mixed data from the Aussie and China, the AUD/USD currency pair extends its bearish trajectory for the 3rd-day in a row.

However, the reason for the risk-on market sentiment could be associated with the probabilities of further stimulus and hopes of the coronavirus (COVID-19) vaccine, which tends to underpin the perceived risk currency Australian dollar and helps the pair to limit its deeper losses. It is worth reporting that the AstraZeneca continues its final tests for the coronavirus vaccine. Meanwhile, around 76 rich countries, the global policymakers join to help for the vaccine developments and distribution.

On the contrary, the two biggest economies are at loggerheads after the latest headlines concerning additional sanctions on China diplomats by the U.S. Also fueling the tussle could be the reports suggests Beijing’s embassy in America criticized harshly by the U.S. However, these gloomy headlines could also be considered as the key factor that has been weighed on the Aussi pair.

Despite the risk-on market sentiment and downbeat U.S. data, the broad-based U.S. dollar flashing green on the day supported by Tuesday better-than-expected PMI data, which fueled the hopes of the U.S. economy. However, the U.S. dollar’s bullish bias could be short-lived as doubts remain about the U.S. economic recovery amid Wednesday weaker than expected ADP report. However, the gains in the U.S. dollar became the key factor that kept the currency pair lower. Whereas, the U.S. Dollar Index that measures the greenback against a bucket of 6-major currencies rose by 0.03% to 92.977.

Looking ahead, the market traders will keep their eyes on final German and Eurozone PMI readings, which is scheduled for release on the day. As well as, the Friday’s Nonfarm Payrolls (NFP) will also be key to watch. In the meantime, the updates surrounding the fresh Sino-US tussle, this time over the South China Sea, and the coronavirus (COVID-19) updates, could not lose their importance.


The AUD/USD is trading at 0.7317, having violated the double bottom support level of 0.7337 level. Closing of candles below this level may drive sharp selling until 0.7289 and even below this until 0.7275. Conversely, a bullish crossover of 0.7369 may drive intense buying until the 0.7385 level. Bearish bias may dominate today.