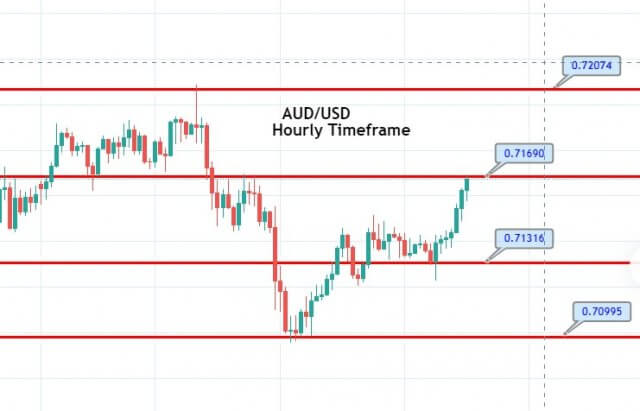 The AUD/USD pair was closed at 0.71398 after placing a high of 0.71513 and a low of 0.70954. Overall the movement of the AUD/USD pair remained bullish throughout the day. After posting massive losses on Tuesday, the AUD/USD pair reversed its direction on Wednesday and started to rise and managed to recover most of its previous daily losses.

The rise in AUD/USD pair on Wednesday could also be attributed to Wall Street’s rebound amid confusion over the US stimulus plan and uncertainty about the upcoming US Presidential elections. On Tuesday, Trump broke off negotiations with Democrats and said that Republicans would not negotiate on the next round of stimulus measures until after the election. He added that a major stimulus bill would be passed if he wins. This statement from him caused a bid drop in Wall Street on Tuesday over concerns whether he will win or not as stimulus will be dependent on that.

However, on Wednesday, Trump again dismissed his previous statement and called for more financial support for Americans, especially airline workers and small businesses. This news helped US stocks to reverse and move higher and recover some of its previous daily losses. The rebound in Wall Street added in the risk sentiment and helped the riskier AUD/USD currency pair move higher.

The risk sentiment was also supported by the latest announcement from the US Food and Drug Administration (FDA) that said that vaccines’ availability would be delayed until after the US Presidential elections. This news also added strength to the AUD/USD pair due to its riskier nature.

Meanwhile, the Federal Reserve issue minutes from its September meeting, and the minutes failed to provide any meaningful direction to the pair as Fed officials called for further support from US Congress for supporting the economic recovery.

Minutes also showed that economic data were improving, but the economic growth was still bumpy. The President of Minneapolis Federal Reserve, Neel Kashkari, said that if the next round of stimulus package was not approved, then the US economy will face enormous consequences. He stated that further delay would cause a much worse downturn in the economy as there were no moral hazards in delivering more financial aid. The Fed’s comments also raised risk sentiment and helped the riskier Aussie gain traction in the market and add further to the AUD/USD pair’s an upward trend.