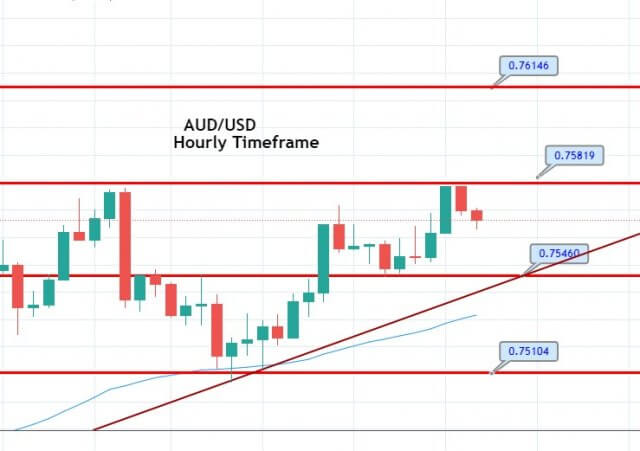 The AUD/USD pair was closed at 0.75571 after placing a high of 0.75712 and a low of 0.75070. The currency pair AUD/USD rose on Tuesday amid the broad-based US dollar weakness and the RBA meeting minutes from the December meeting.

The renewed selling pressure surrounding the greenback was helpful to AUD/USD pair for pushing it higher as the US Dollar Index (DXY) was down by 0.2% on the day towards the 90.51 level. The US dollar was weak across the board because of the renewed hopes for US stimulus measure and the rising number of coronavirus cases in the region.

Meanwhile, the rising risk sentiment of the market also helped the AUD/USD pair to gain traction in the market. The risk-sensitive Aussie gained strength after the US Food and Drug Administration reported that Moderna’s coronavirus vaccine would be approved for emergency use later this week. The rising Australian dollar helped the AUD/USD pair to post gains on Tuesday.

Furthermore, the Reserve Bank of Australia released its minutes from the December meeting in which the Bank said that it was prepared to do more if needed, and its focus will be on the bond-buying program. RBA did not expect to raise interest rates for at least three years and until the inflation reaches the bank target of 2-3%.

Bank said that the recovery in the labour market was more advanced than expected, and substantial tightening in the labour market was needed to lift wage growth and inflation. Bank acknowledged that China’s restrictions on Australian imports had some effect, but the demand for iron-ore was still firm. Last, the Bank suggested that the delivery of vaccines in the US and Europe would reduce downside risks for global growth. These positive statements from the Reserve Bank of Australia lifted the AUD/USD pair on Tuesday.

However, the gains in AUD/USD pair on Tuesday remained limited as the latest news about the new variant of coronavirus raised fears as it spread faster and raised the safe-haven appeal, and weighed on the risk perceived Aussie that ultimately capped further upside in the AUD/USD pair.

On the technical front, the AUD/USD is trading slightly bullish at 0.7560, facing immediate resistance at 0.7580 level. Bullish crossover of this level can extend upward trend until the next target level of 0.7615. However, failure to break above 0.7580 level can extend selling moves until the support area of 0.7545 level. The 50 periods EMA is suggesting buying trend, but the MACD is suggesting overbought scenario. Thus, we should look for bearish correction before entering another buying trade in the AUD/USD pair. The bullish bias remains dominant. Good luck!