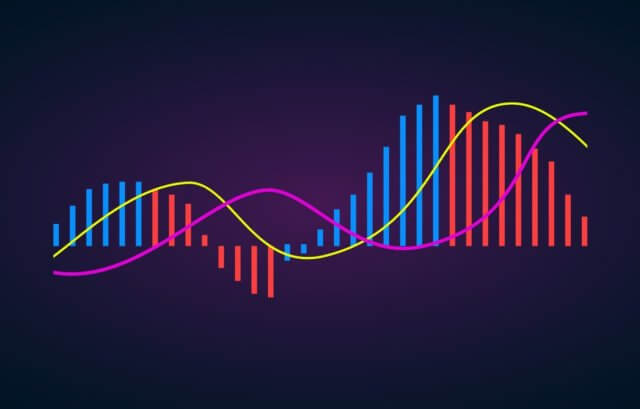 In the previous lesson, we understood the definition of Moving Average, their importance, and the significance of ‘length’ in MAs. We also learned the correct way of choosing the ‘length’ while using Moving Averages. In the upcoming articles, we shall see and understand the different types of moving averages. Let’s start off by learning the first type – Simple Moving Average (SMA).

The SMA is a very simple Moving Average that is calculated by the summation of the last ‘n’ period’s closing prices and then by ‘n.’

Let us understand the above formula with an example.

In the below chart, we have potted three different SMAs on the chart. This chart represents the 1-hour time frame of a currency pair. As we see, longer the period of SMA, more it lags behind the price. This explains the reason why the 60 ‘period’ SMA is farther away from the 30 ‘period’ SMA; because the 60-period SMA adds up the last 60 periods and divides it by 60 as mentioned above.

When the period of an SMA is large, it reacts slowly to the price movement. Essential, SMA shows the overall sentiment of the market at any given point in time. However, SMA should always be used to find the direction of the market in the near future but not take trades based on this information alone.

Instead of looking at the current price of the market, we need to have a broader view and predict the direction of the future price movement. Using SMA, we can say if the market is in an uptrend, downtrend, or if it is moving sideways.

One major drawback of SMAs is that they are vulnerable to spikes. So, during the calculations, the prices of the currency pair, which is of no significance (high or low of spike), will be added up and shown by the SMA line. The reason behind less significance to the prices of spikes is because they give false signals, and we might think a new trend is developing, but in reality, it is just a failure of the price.

The below figure shows how the SMA would be when there are too many spikes in the chart. As we can see, the 10 ‘period’ SMA is not uniform and is not able to show the direction of the market in the occurrence of spikes. 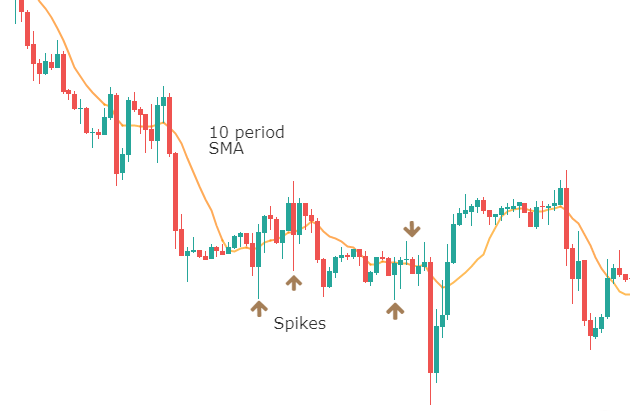 The SMA should be plotted to know the market trend when it is not clear. It can also be used to forecast the price movement in the near future. It is very important to combine this indicator with a trading strategy as it can never produce the results when used standalone. In the next lesson, we shall introduce another type of moving average and see how it can solve the issues we face with SMA.